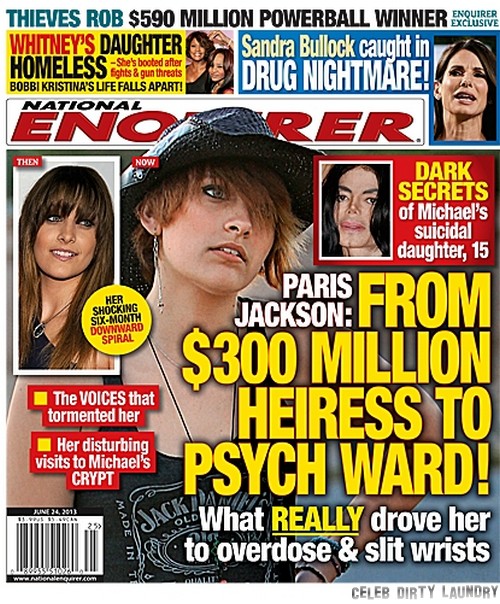 The Paris Jackson suicide attempt has been covered extensively, and there’s still a lot of speculation about what exactly caused her to go to such extremes to end her life. The cover reads, “Paris Jackson: From $300 Million Heiress To Psych Ward: What Really Drove Her To Overdose And Slit Her Wrists.” The insider report claims to have all the details about her ‘shocking six-month downward spiral’, including her visits to her dead father’s crypt, and the voices that tormented her.

This cover of this week’s National Enquirer gives us quite a few breaking stories. We have Paris Jackson’s suicide, Whitney Houston’s daughter being homeless, and Sandra Bullock dealing with a drug scandal?!

We also find out about Whitney Houston’s daughter, Bobbi Kristina, getting kicked out of her house after fights and gun threats. I can only imagine how her life is falling apart, especially after losing her mom in such a public manner.

And finally, Sandra Bullock ‘caught in a drug nightmare’. What??!! Sandra Bullock, drugs. Those are two words I never thought I’d see together. Could it be her stressful work schedule, encounters with her ex-husband, or dealing with something else? Or could Sandy dealing with ‘drugs’ really just be about how she’s talking Adderall to stay awake? We’ll find out soon enough.