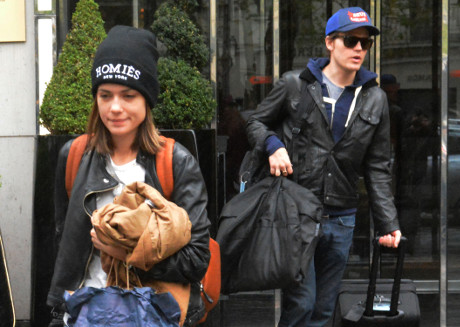 There must be something in the water over at The Vampire Diaries set because yet another relationship involving the show’s stars is heading for splitsville! Paul Wesley, who of course plays Stefan, and Torrey DeVitto (Dr. Meredith Fell in TVD) plan to divorce. They confirm the separation is an amicable one. Aren’t they always? Of course it will be amicable. Why would a Hollywood break up be anything but amicable? Oh, and don’t worry, they say they’ll maintain a perfectly peachy friendship.

The first relationship that was staked a few months ago involved the primary TVD showmance between Nina Dobrev and Ian Somerhalder. This particular pairing had fangy fans clamoring over the popular vampire drama, and people couldn’t get enough of both their on screen sexual tension and real life adorableness. Their break up struck the fear of the universe into many involved with the show, because nobody was sure how this new split energy would influence production.

People are still bit uncertain how their new relationship status will add to the once-fruitful magic conjured on the set, and now it seems as if the show will have to put up with yet another broken couple — that is, of course, if the show was planning on working with Dr. Fell in the upcoming season.

Honestly, in my opinion, Dr. Fell wasn’t bringing much to the table in terms of character, so I have a feeling that they’ll *erm* send her somewhere else. Anyway, Torrey is busy with Pretty Little Liars, where she plays the character of Melissa.

What do you think about this most recent vampire split? Let us know in the comments below.