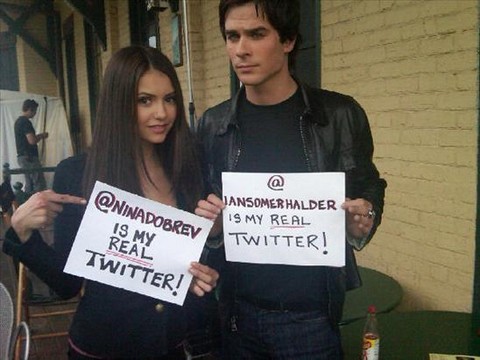 Are Nina Dobrev and Ian Somerhalder avoiding each other on the set of the Vampire Diaries? It’s been a few months since the couple has broken up, but they are now back in Atlanta filming the fifth season of the Vampire Diaries. We said last week that we would know for sure what was going on when Nina and Ian got to the set, and it seems like we have our answer.

According to several different sources, both Nina and Ian have been making sure to stay clear of each other on set. This doesn’t necessarily mean that there is bad blood between the two, just that they are still dealing with issues from the split. Obviously, all the professional reports have been saying that Nina and Ian remain friends, they will remain ‘professional’, bla bla. Considering that we don’t know what the writers have in store for Season 4, we can only hope that Nina and Ian don’t have too many intimate scenes on set, otherwise things will probably get awkward real fast.

What do you guys think about Nina and Ian avoiding each other on the set of the Vampire Diaries? Does that surprise you, or were you expecting it? Let us know your thoughts in the comments.