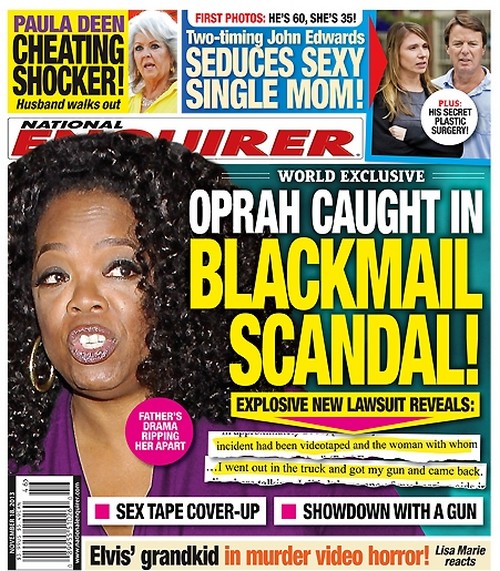 Just when things had finally quieted down for Paula Deen on the professional front it now looks like her personal life is about to implode. After months of being under fire for making questionable statements that offended an entire race and left her financial empire teetering on the brink, it seems that she better turn all of her attention back towards the home front. According to the Nov. 18th print edition of National Enquirer Paula’s husband, Michael Grover recently walked out on her. It seems that rather than pulling together during the tumultuous time they instead went their separate ways and Paula was caught finding comfort in the arms of another. Michael stood by his wife as the media crucified her and her former fans vilified her but infidelity is the straw that broke the camels back in this relationship it seems.

It looks like John Edwards is at it again. I’m not sure exactly what this guy does but for some reason much younger women are drawn to him. This time around the 60-year old has been seducing a 35-year old single mother. At least he’s single and morally can date whomever he pleases, right?

Is Oprah Winfrey caught smack in the middle of a blackmail scandal? According to the new issue of National Enquirer the media maven is over an emotional barrel thanks to a situation that her father has gotten himself into. She’s also tangled in the mess and it’s simply not good for business. Do you think that anything can ever permanently tarnish Oprah’s image? Tell us your thoughts in the comments below!