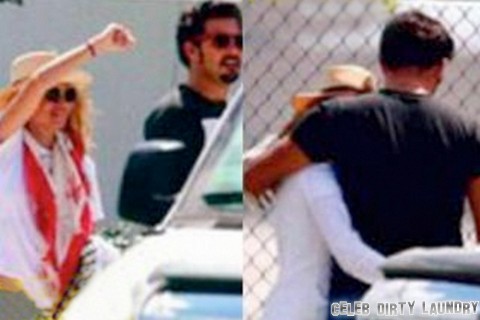 One of the putative new X-Factor USA judges, Paulina Rubio, has a very interesting past. Dubbed, “La Chica Dorada” (The Golden Girl) in Mexico, her recent fisticuffs with former assistants and photographers are making headlines. Clearly, these headlines did not eliminate her from consideration or final negotiations. In fact, they probably improved her chances of being hired! Simon Cowell needs someone else to bring the drama AND ratings on the X Factor.

In March 2013, Felipe Restrepo Betancour, a former assistant, claimed that Rubio beat him, was aggressive and humiliated him. (LA Times) This was all because Betancour booked a seat for Rubio in coach class, instead of business class on a flight to hell apparently, since it caused her to allegedly put her hands on him! In 2010,allegedly threw her then-husband, Nicholas Vallejo Najera, out of their Miami house because he would return home from dinner outings drunk and late. No bueno! A week before the birth of their son, Andrea Nicholas, she threw Najera out again and threatened his presence at their son’s birth! She’s cold!

Rubio’s troubles seemed to reach their peak in 2012. She was going through a bitter divorce and separation. She owed over $130,000 in Florida taxes, nearly $80,000 to the IRS, and $530,000 in late fees for taxes in Mexico. She must have taken care of those tax issues because she was being threatened with jail by the IRS!

She has since finalized her divorce from Najera in March 2013 and the 41-year-old Rubio has a new boyfriend! His name is Gerardo Bazua and he’s from Venezuela. He’s 28-year-old former contestant she coached on the second season (2012) of the Mexican version of “The Voice,” “La Voz.” Mexican media has reported on this relationship for months despite denials by Rubio and Bazua, and in March 2013, they were seen canoodling together in Cancun, Mexico.

Rubio’s anger knows no bounds! From personal assistants to her ex-husband, no one is safe. This new X Factor gig is a godsend for Rubio! She can earn what looks like some much needed cash and rehabilitate her image… maybe! I just hope her new boy toy will keep her from lashing out at X Factor contestants.