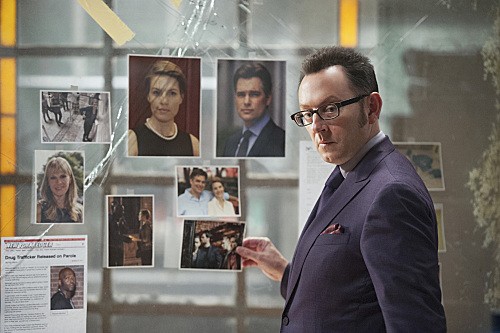 PERSON OF INTEREST comes back for its 4th episode in its third season and we can’t wait to see what happens tonight on the new episode entitled “Reasonable Doubt.”  On tonight’s show Carter faces an issue with her new partner, Laskey, after he spots her with Reese.  Did you watch last week’s episode?  We did and we recapped it right here for you!

On last week’s episode, Reese and Finch enlisted the help of Carter, Shaw and Zoe Morgan, who used their feminine wiles to bait a chameleon playboy who was either a predator or someone else’s imminent prey. Meanwhile, The Machine helped Root to plot an escape from her psych ward confinement before a dangerous enemy could track her down.

On tonight’s show the team gets the number of a prominent New York lawyer and has to determine whether she orchestrated the death of her recently murdered husband, or if she is being framed. Meanwhile, Carter faces an issue with her new partner, Laskey, after he spots her with Reese, aka “The Man in the Suit.”

Tonight’s Person of Interest Season 3 Episode 4 is going to be exciting, and you won’t want to miss it. So be sure to tune in for our live coverage of the new episode of Person of Interest — tonight at 9PM EST! While you wait for our recap, hit the comments and let us know how excited you are about the show. Don’t forget to come back at 9PM for our LIVE recap!

Their dog is sick. He hasn’t been doing well in a long time but when the vet leaves the area to get medication, Reece follows her. It seems the animal wasn’t ill at all. He was merely their cover in protecting the vet from two guys that wanted to kill her. As a thank you, Finch makes sure to ask for a expensive chew toy she had on display. Doesn’t hurt to reward their part in the endeavor. No time to relax though. The machine is still working.

Vanessa Watkins is the newest number. She’s a prosecutor whose husband went missing several days ago. Reece was following her when she got arrested for the murder of her husband. At first the two guys are confused. They wonder if the machine gave them her number too late but Finch says the threat is still there. The machine generated her number after her husband went missing.

It’s not as if the cops have her husband’s body. They have blood and a supposed witness stating they saw Vanessa throw a gun overboard. Good but will essentially mean nothing unless they gain a confession. Vanessa knows this yet she asks for a lawyer she once called ineffectual and lazy. Apparently the woman had a purpose. Vanessa knew she could knock her out and impersonate her easily.

She didn’t have to go through all of that trouble. The guys were already set to break her out. In truth a prosecutor in lock up overnight wouldn’t last long. She’d be lucky if she had survived.

Although she broke out her movements seem just too weird. She stole a cell phone of a an old man. Then she went to meet a drug dealer she has put away. She also helped him get a lighter sentence despite the fact. In return she got a large bag of cocaine. Why? What does a person on the run need with so much coke?

Shaw thinks she really did kill her husband. At one point Vanessa jumped off a rooftop in order to escape persecution. The detective on her case has personally grudge against her and she knew she wouldn’t get a fair hearing. That’s why Shaw believes she did it.

She goes undercover to a book club meeting of all places. The woman hosting the get together is Vanessa’s best friend. Shaw went there thinking Vanessa would eventually reveal herself but what she found what that the best friend was having an affair with Vanessa’s husband. So now she’s guard duty. Vanessa may want to kill the mistress is she suspects the other woman had a part in her husband’s death.

But that’s no where Vanessa was found. She went in search of the witness against her. Much to Reece’s amusement she planted that brick of coke on the guy before calling in a “tip”. Reece caught her sneaking away and brought her in.

Once she’s in front of the panel of Reece, Finch, and Carter she has to prove her innocence or else they’ll turn her into the police.

Yes, She knew about the affair with other women but not her best friend. However Carter trusts her. Odd but sweet. The same way she’s learning to trust her new partner. Too bad he’s collecting information her and reporting back.

They know that to Vanessa it was new information with the whole BFF crisis and yet they know all the evidence the cops had on her was planted. They know she’s innocent of murder but who would frame her?

Turns out it was her husband. He cleaned out their accounts and was going to frame her for his death. It was a ploy to kill his wife. A prosecutor in prison in remember. Still something wasn’t right about the story. It seems Vanessa had a fake passport along with her husband. Confused then here’s what really happened. Vanessa helped her husband fake his death but then he turned against her by framing her for his death. After hearing about her fiend she realized he was going to run away her bestie instead. Shaw was right. Vanessa is the perpetrator.

They have Reece tailgating Vanessa to see where she goes. He had accidentally given her a gun for protection earlier thereby making whatever happens next his mess. But at the moment of crisis, ie walking in on her holding a gun to her husband, Reece doesn’t disarm her. He sets out a second gun to make it a fair fight and then he leaves the married couple to it. Someone’s weapon went off but we never realize who’s….