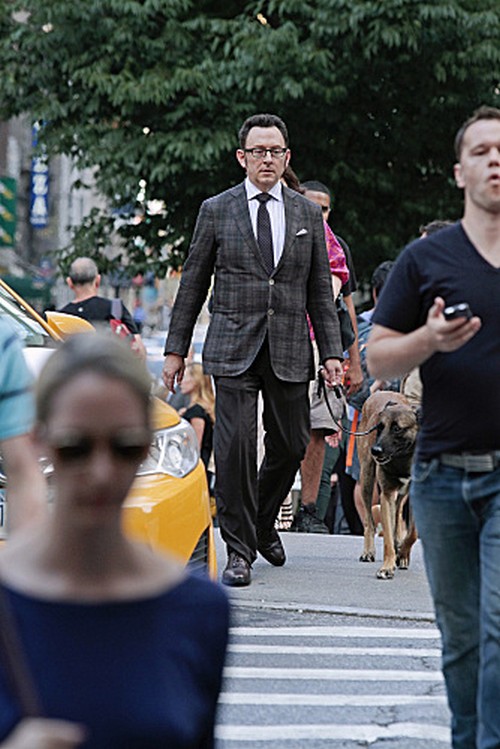 PERSON OF INTEREST comes back for its third episode in its third season and we can’t wait to see what happens tonight on the new episode entitled “Lady Killer.”  On tonight’s show the Machine helps Root to plot an escape from her psych ward confinement before a dangerous enemy can track her down.  Did you watch last week’s episode?  We did and we recapped it right here for you!

On last week’s episode, the number came up for an Internet entrepreneur in the business of eliminating people’s privacy, but found his own being rapidly stripped away. As his life spiraled out of control, Reese tried to protect him while Finch called on Shaw, Carter and Fusco for help finding whoever was after him. Meanwhile, Carter found herself unexpectedly paired with new rookie partner, Mike Laskey

On tonight’s episode, Reese and Finch enlist the help of Carter, Shaw and Zoe Morgan, who use their feminine wiles to bait a chameleon playboy who is either a predator or someone else’s imminent prey. Meanwhile, The Machine helps Root to plot an escape from her psych ward confinement before a dangerous enemy can track her down.

Tonight’s Person of Interest Season 3 Episode 2 is going to be exciting, and you won’t want to miss it. So be sure to tune in for our live coverage of the new episode of Person of Interest — tonight at 9PM EST! While you wait for our recap, hit the comments and let us know how excited you are about the show. Don’t forget to come back at 9PM for our LIVE recap!

Reece and Shaw are undercover on a date. They’re following Ian Murphy on his date. A seemingly nice self-made young man. He’s not in debt or involved in anything crooked. Yet Shaw spotted him changing clothes to create a new image. He did that because he went on a second date with a different woman.

He likes to play the field. When Reece looks in on Ian’s apartment he finds profile from stalker sites all on women. Lots of women. He finds out their interest and uses that to “hunt” them. Shaw is wondering why they don’t put him down now but Finch calms her. He says they don’t know if he’s done any nefarious. Well it looks he might have. Not only are there profiles of live women in Ian’s files but there’s also two articles one dead woman and another missing.

The missing girl was a girlfriend of his. While the girl killed in a car accident has no connection to Ian other than attending the same college. Reece feels the only way they can figure out if Ian is a killer or not is if they set a trap. The honey trap comes in the package of Carter, Shaw, and a returning Ms. Morgan.

Finch set up a romantic profile for each of them and now they got to sell it. In Shaw terms that means she needs to stop looking angry. Arriving at the club the girls do their best to have fun on top of looking out for Ian. Once he gets there he homes in on Carter. She is his type.

She agrees to an official date but he may have become too interested. He begins to follow her when suddenly he stops and leaves. He has her picked out and yet didn’t take the opportunity to snatch her. The next day at dinner he goes as far as to find out she’s allergic to nuts. He says he wanted to put her at ease.

If only Root could do that. Despite scaring the living hell out of her doctor, he still treats her like she’s clinical insane. He wonders if the voice she hears comes from God and what not. Root at first tries to correct him until she finds him no use to pander to. The machine her friend is more helpful than she let on though. When she wants to steal drugs, the machine helps her. She basically can go anywhere she wants to inside of her ward with a little her from her friend.

Ian and Carter’s date ends and when he walks her out they find out he’s the victim. Two men tried to kill him. Carter and Shaw protect him but he has to explain things. He doesn’t hunt women. He takes the extra time to guess their every need is all. Creepy but expedient.

The girl that died was an ex-girlfriend of his. Her father, Wellington, is the one trying to have him killed. He had never approved of his daughter dating Ian and so he made sure they broke up. He made his daughter get an abortion and paid Ian off. Ian only saw them later for a brief moment when he showed up at the ex’s funeral.

No one could understand why Wellington could hold onto his anger after all this time. Then they saw a photo from the funeral. Wellington has a grandson that looks just like Ian. He had hos other daughter raise the boy and now he’s trying to kill Ian before he realizes the truth.

Maybe because they knew Ian would never stop. When Ian did find out he escapes Finch’s watchful eye and kidnaps his son from school. The team wanted to get DNA evidence but when Ian found out the boy’s grandfather was taking him to London in 24 hours, he got desperate.

Commons sense does kick in. He calls Carter to tell him what he did and takes Alex out to the park. Carter meets them there to take the boy home. Ian had gotten a chance to talk to him at least.

The machine helped Root escape. Several people were knocked out and only her doctor remained awake. Root knew a government operative was coming to kill her and that’s why she acted first. Root wanted to the operative but the machine didn’t give her permission.

After she escapes, Finch arrives on the scene.