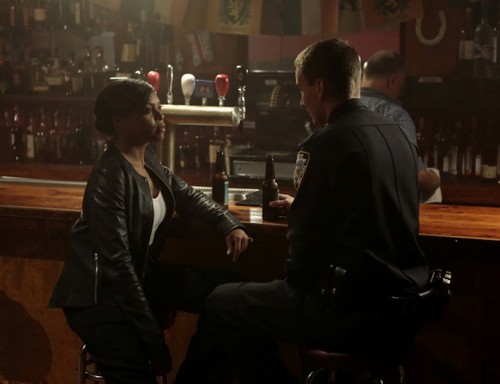 PERSON OF INTEREST comes back for its 4th episode in its third season and we can’t wait to see what happens tonight on the new episode entitled “Razgovor.”  On tonight’s show Carter’s mission to bring the crime organization HR to justice risks exposure.  Did you watch last week’s episode?  We did and we recapped it right here for you!

On last week’s episode team got the number of a prominent New York lawyer and had to determine whether she orchestrated the death of her recently murdered husband, or if she was being framed. Meanwhile, Carter faced an issue with her new partner, Laskey, after he spotted her with Reese, aka “The Man in the Suit.”

On tonight’s show when Shaw is tasked to stay close to a 10-year-old identified by The Machine, she grudgingly develops respect for the young girl’s skills in surveillance and realizes it could be the very reason why her number has come up. Meanwhile, Carter’s mission to bring the crime organization HR to justice risks exposure.

Tonight’s Person of Interest Season 3 Episode 5 is going to be exciting, and you won’t want to miss it. So be sure to tune in for our live coverage of the new episode of Person of Interest — tonight at 9PM EST! While you wait for our recap, hit the comments and let us know how excited you are about the show. Don’t forget to come back at 9PM for our LIVE recap!

Shaw needs to work on her bedside manner. No, she honestly needs a lesson. Because she stopped a organ robbery ring but she was willing to injure an innocent bystander. Maybe the new number can help her adjust to being nicer or at least careful.

The newest number doesn’t belong to a social security though. It’s from a green card. The legal alien they’re supposed to be helping turns out to be too surprising for Shaw to handle. It’s a ten year old little girl but she’s much smarter than people would guess. She says she’s training to be an intelligence operative.

Litter Jenrica was already suspicious of Shaw so the team was only supposed to follow her. Yet a child was able to make Shaw’s cover. Seeing as the situation is delicate, Finch wants Reece to take over. Yet when the girl was almost snatched off the street; it was Shaw that managed to get custody of her. Guess there isn’t an opportunity to learn to be delicate.

The kid has a lot of questions. She doesn’t know why people tried to snatch her and she wasn’t sure whether Shaw was a robot. She’s not. A fact she learned once touching her. Although there are a lot more questions and sadly not enough time. Her potential kidnappers followed their location. They’re saved when the girl shows Shaw her secret place.

It’s also a clue to why people might want to hurt her. She was bugging anyone that looked suspicious. She told Shaw she wanted to get the drug dealers out of her building. She was able to do all of this because her grandfather taught her how. He was in the KGB.

Shaw was beginning to open up to her new friend when their safe place got invaded. Someone had busted a pipe making them having to evacuate in a hurry. They barely made it to the exit before Shaw was knocked out and Jenrica got snatched.

Shaw awoke in the trunk of a car. She was able to get rid of the driver and make a call to Finch. They don’t have her and they were hoping Shaw did. Finch and Shaw know she’s wounded. They saw the blood at the scene so they want to bench her. Shaw isn’t really feeling that. She refuses to fail. Even if that means going behind the guys’ back.

Carter has is getting close to the leader of the dirty cops. Reece and Finch want to know why doesn’t she simply take what she has now but she did that before. It got someone killed the last time. This time she’s going after the head of the snake. That way HR won’t be able to regrow like nothing happened. As she’s searching for more info, her new partner reports her movements to HR.

As she was following a trace on of her guys; he case collided with Reece’s. They’re looking for the same man. A dirty cop with ties to the Russian organization. Shaw had learned that Jen’s cousin was the one that turned her in. Her wire taps was too outdated and that’s how they were able to find her relative.

HR cooks a new form of drugs out on the market. Afterwards the Russians distribute it.

Reece knows what they have to do to get the girl back. Carter agrees without him saying it. She’ll trade in her intel she’s been collecting in for Jen. Hey have a plan but Shaw is acting on emotions. She confronts a higher up in the Russian mafia. She uses him to make a deal with HR. Then she uses him as a secondary blood supply.

Reese informs Carter about the change and her partner watches her reaction to another secretive call. He calls HR and they set up a trap. All he has to do is get Carter to a certain place at a certain time.

Arriving on the scene the cops figure out that crime doesn’t pay. They walked into a trap while Shaw is at the real location finding Jen. She grabs her and blows up the drug den with help from Finch of course. This way they set back someone’s side business back a long way.

Carter knew her partner was dirty. With that out in the open the once shy rookie feels he no longer has to play nice. He had taken her to a bar. There are only the two of them and the bartender. Carter took care of bartender, a former lieutenant that bought his bar with dirty money. Then she gives the rookie a chance. She killed the bartender with his gun so he’ll go down for it not her. He has a choice to make. Either he works for her or goes to jail.

Shaw dropped off Jen at her new school. She became a ward of an reclusive billionaire so her life is looking up. For probably the first time in a long time, Shaw shows an emotion other than anger, She’s going to miss Jen. They became friends.

Throughout this case, Shaw was remembering when she lost her father and had simply turned her emotions off. Jen says the emotions are still there just Shaw turned the volume down. Later, Shaw was asleep when she woke up to find Root standing over. She didn’t have time to react before she got stun gunned.