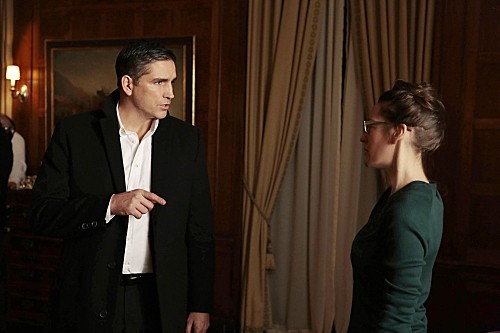 Tonight on CBS PERSON OF INTEREST returns with a whole new episode called “One Percent.” On tonight Reese and Finch meet their match in a tech billionaire. Did you watch last week’s episode we did and we recapped it here for you!

On last week’s show Reese’s former partner Kara abducted him as part of her scheme to unleash a wave of cyber-terrorism across the world and got revenge on the people she believed wronged her.

On tonight’s show a tech billionaire POI make Reese and Finch meet their match because his curiosity and limitless resources threaten to expose their identities and sabotage their efforts to save his life.

Tonight’s Person of Interest Season 2 episode 14 is going to be exciting, and you won’t want to miss it. So be sure to tune in for our live coverage of the new episode of Person of Interest — tonight at 9PM EST! While you wait for our recap, hit the comments and let us know how know what you thought of POIs season 2 episode 13 last week. Check out a sneak peek of everything you need to know about season 2 of POI! Don’t forget to come back at 9PM.

John is watching Pierce Logan play basketball with other guys on a court. Pierce is a college dropout, a genius and a billionaire who co-founded Friends R. com. His long time business partner, Justin is the money guru. They are taking the company public in 72 hours.

Joss is still following up on a tip about a cop named Davison who was killed by another cop even though Kevin thinks it’s a waste of time. She is emailed lawsuits against Pierce by Finch.

John observes Logan and Justin at a party the two are hosting. John is pretending to be John Wiley. A man and his wife Cynthia’s are there. Cynthia’s network company was devalued by half when Pierce’s operation launched. Piece approached John but quickly backs off because he finds other 1% tedious. John places a $10 million bid to get under Piece’s skin after Piece and the man get into a biffing war. Pierce gets a text and takes off. John sees Pierce and Cynthia being affectionate.  Pierce suddenly takes off in a helicopter.

In 2001, the events of 9/11 are unfolding. Harold is told they have to change their world in order to stop the people who did this.

In 2013, an erratic Pierce is walking around the neighborhood in only shorts and a vest. He picks up a change of clothes at the cleaner and changes right into his suit. He is waited on by Harold who has planted a listening device in his possessions.

At the disposition over whether or not he stole the idea for his company, Piece is disrespectful and sleeps through it. The plaintiff, Emily, does not show up. Her lawyer claims intimidation. One of the stock members is horrified by the press of Pierce in his underwear. Pierce decides to go to Coney Island. Logan tarts to have trouble issue with his car. It has been tampered with.  Harold tries to fix the hacking before a cargo truck hits him. Finch saves him. Pierce immediately gets out of the car and heads into a cab.

John forcefully shows up and tells Piece that his life is in danger. He can no longer stay behind the scenes. Pierce says it sounds like fun.

Finch begins to wonder if Emily was behind the hacking on Pierce’s car. Pierce still insists on driving the car. He drives John back to his home. Pierce begins to play video games, missing his IPO. The board has called an emergency meeting—Pierce is no longer CEO. Pierce toasts to unemployment. Pierce starts to suffocate after taking the spiked scotch. John does an emergency tracheotomy and saves him. Pierce wants to know who has asked John to protect him.

Pierce tells Finch that whoever poisoned Pierce had access to him. Pierce suddenly sneaks up on them and wants to know who Finch is.

Pierce figures out that Finch is the brains of the operation and that John has special Ops training. Finch tells Pierce that they don’t exist. Pierce knows because he has not been able to find any information on them. Finch reminds them that they have saved his life twice and that they are taking him to a safe house to keep him alive.

Pierce leads Finch to a bar turned into a bomb shelter halfway across the world.

Joss says she got a partial print over who tried to kill Pierce. It is an officer of the court. Pierce told his lawyer where he would be. Finch tells John that Jeremy, his lawyer, tried to kill him because Pierce wanted to switch law forms after the IPO. Pierce told his entire group of friends where he would be, angering John. John says that Pierce is not taking his safety seriously and leaves.

Joss is still focused on who made the two cops disappear. Joss says she wants to trust Fusco but she will not cover or him if his mistakes come back to haunt him because she’s still a cop.

There is another threat against Pierce and he is in immediate danger.  John goes to the hotel where he has checked into. Once there, he finds an unhinged Emily who is shooting. John realizes that Emily is working with Pierce and not against him. Pierce wanted him and Emily to work together. Her technology would cannibalize Friends R US, costing Justin a lot of money.

On a pier, Justin has thugs beat up Pierce and says that he brought this on himself. They are about to throw him over the bridge but Justin wants one last word. Pierce says he used to be passionate and principled. Justin says that Pierce did not want to run a business and that he knows nothing about friends since all his friends want him dead.  Justin drives off, leaving pierce to die. John gets there just in time to save Pierce. John tells Pierce again to get new friends.

Justin is brought up on charges for attempted murder. Emily, Pierce and Ben Camen decided to start a rival company against the slumping Friends R Us.

Pierce returns to the basketball court and gives his fancy ride away. After giving John a thank you gift, he decides to take the subway home. The gift is an expensive watch. Finch crushes it to the ground and finds a GPS inside.