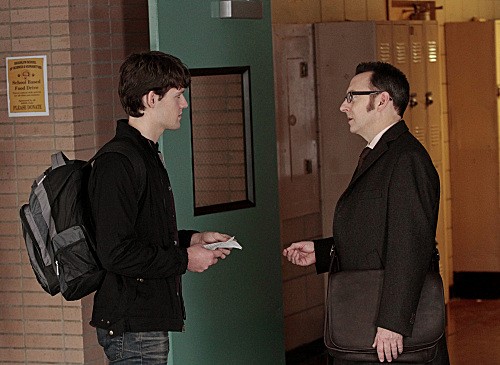 Tonight on CBS PERSON OF INTEREST returns with a whole new episode called “Prisoner’s Dilemma.”  On tonight Carter engages in mental warfare to help Reese avoid detection.  Did you watch last week’s episode we did and we recapped it here for you!

On last week’s show Finch went undercover as a high school substitute teacher to protect a teen genius POI as Carter undertook a dangerous mission to stop the FBI from determining that an imprisoned Reese is the “Man In a Suit.”

Karolina Kurkova guest stars as herself.  Karolina will catch the attention of Jim Caviezel’s former CIA agent and mysterious “Man In the Suit” character, as well as the rest of his team.

Tonight’s Person of Interest Season 2 episode 12 is going to be exciting, and you won’t want to miss it. So be sure to tune in for our live coverage of the new episode of Person of Interest — tonight at 9PM EST! While you wait for our recap, hit the comments and let us know how know what you thought of POIs season 2 episode 11 last week. Check out a sneak peek of everything you need to know about season 2 of POI! Don’t forget to come back at 9PM.

Tonight’s episode of Person of Interest picks up right where it left off last week. Reese is still being held at Riker’s and ironically Carter is assigned to try and poke holes in his identity. Agent Donnelly rightfully believes that Reese is the man in the suit and Carter has to play both sides to protect Reese.

She has to interrogate him while Donnelly listens in and disapproves of the patch that Carter is taking. She has three other men mixed in with Reese and she is weeding through them trying to shift the focus on everyone but Reese.

In a pivotal moment, Reese is let outside in the yard and comes face to face with Elias- the mob boss that he put in Riker’s. His cover can easily be blown now. Elias pulls him into a corner where there are no cameras and actually offers to help Reese. There’s an unlikely partnership.

One of the other three guys is being interrogated when Finch, mastermind of all gadgets, manages to hack into the prison system and pull the fire alarm. He tells Carter to put her phone in the inmates pocket as the exit the prison. Finch calls the guy and rattles off the guys whole crooked history and suggests they forge a mutually pleasing relationship.

Finch and Carter work together now while Reese is interrogated. As Reese gives answers Finch hacks in and creates fake proof of the answers. Donnelly checks every answer and Finch’s fake proof pops up on his screen every time. Team work at its best. As Reese tells about his true love Allie, Carter is sucked in. It’s clear that not every detail is fake on Reese’s’ part.

Donnelly sends Reese out into the yard to get the crap kicked out of him. He’s looking for Reese’s combat skills and Reese shows none. Instead he takes the beating. Carter starts leaning heavily on the other guys until one attacks her. He is arrested and Reese goes free.  She later meets Reese at the river at night, as they often do. She asks him if anything he told her was true and Donnelly appears and pulls a gun on both of them.

Donnelly cuffs them both and claims he is driving them to a safe house. Finch pulls up something on Donnelly and realizes they’re all in danger so he calls the agent and tells him just as their car is side swiped. Donnelly is then shot in the head as Reese is knocked unconscious. Tune in next week to see if Reese makes it out okay!