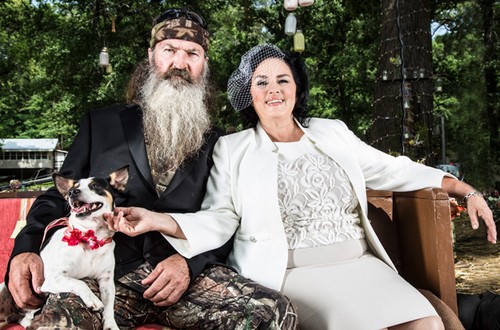 Duck Dynasty star Phil Robertson and his dear wife Miss Kay have a wonderful and loving marriage, as was apparent on the season 4 premiere when the couple renewed their vows. But in the newest edition of The National Enquirer, the couple’s dark past and previous romantic woes are revealed in a troubling feature article. While the front page is overwhelmed by Best and Worst Beach Bodies of the Summer, the true gold in this issue rests in the high-stakes world of duck calls and drama!

The magazine says that they expose Phil’s violent, boozy past and how Kay threw him out into the woods — where he was forced to live like a fugitive! If that doesn’t sound intense then I’m not sure what does. And if you think the excitement stops there, then get out of Duck Town. The tabloid also comments on why Phil chose to throw Kay and his kids out of his house, just how close they came to calling their marriage quits, and the one saving grace that ultimately resurrected their marriage as if it were a glowing-golden-duck-phoenix rising from the ashes.

“You would never guess it from watching the show because Phil and Miss Kay are so much in love and devoted to each other,” says a source for the magazine. “He came close to losing everything, and Miss Kay was so sick of Phil she wanted a divorce.”

No doubt you’ve grown to love these easily-lovable duck callers, who lead commendable lives of hard work and strong family values, but chances are there are a few things you didn’t know about the most-watched Duck People on television. Make sure to go get your copy of the tabloid today.

Are you a Duck Dynasty enthusiast?