Pippa Middleton is a Bird Murderer — And She Loves Herself for it! (PHOTO) 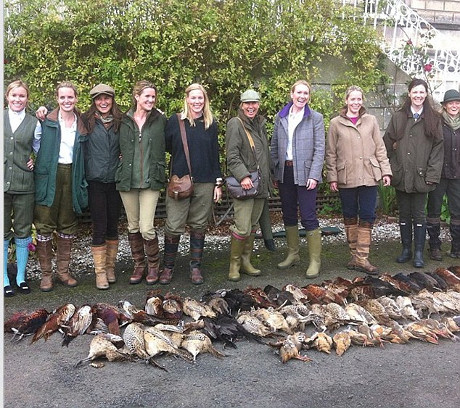 Pippa Middleton, on top of being a world class journalist, is also a bird murderer. Over the weekend, Pippa Middleton journeyed to Scotland where she and some pals had a nice weekend in the countryside at Drum Estate near Edinburgh. While there, she participated in a bit of pheasant hunting, and after the bloodsport was completed she posed in front of her countless prized birds. The photo was recently posted on Instagram and has been making its rounds — mostly to the chest-thumping animal lovers.

You might have guessed that this photo has animal rights activists completely outraged . . . . do you think Pippa should’ve taken a photo like this, or do you think people should just let it go? I mean, lots of people hunt. So why shouldn’t Pippa? Pippa the Huntress is just doing too many things out there in the world. It’s hard for us to keep track of her! One day she’s writing newspaper columns. The next day she’s crashed out in the backseat of the car. Then she’s off to arrange flowers. Or kill birds.

You know, at least she’s experiencing life. Right? What do you think about Pippa? She recently alluded to the idea that she and her boyfriend Nico might tie the knot, but people are a bit unsure of this rumor. Do you think it’s true? Let us know in the comments section below.