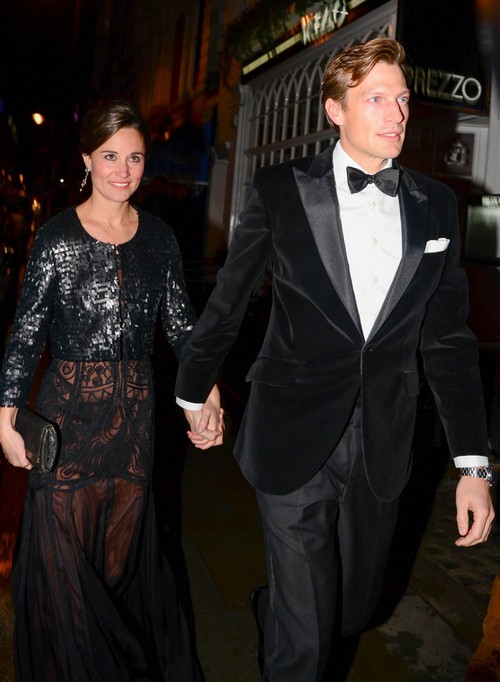 Are Nico Jackson and Pippa Middleton engaged? It wouldn’t be very surprising if they were, considering the rumor mill has been suggesting that an engagement has been in the works for the better part of a year.

Nico and Pippa were both spotted arriving back in London from a vacation in India, and they both certainly looked like they had an enjoyable time. Sporting sun-kissed skin and happy smiles, the duo look like they had a ball, and neither seemed to mind the glare of the cameras.

Although Pippa wasn’t wearing an engagement ring in the photos, it’s thought that Nico might have popped the question to Pippa while they were at the Taj Mahal. We already know that Prince William and Kate Middleton approve of Nico, since both couples were spotted vacationing in the Caribbean earlier this year. Although it hasn’t yet been confirmed that Nico will spend Christmas vacation with the royals, an engagement would probably get him added to the guest list.

What will this mean for Pippa’s career and image? Well, nothing much, really. She’ll continue ‘blogging’ and doing her usual set of ‘jobs’, although she might just stop after the marriage. She might follow in Kate’s footsteps, and become more involved with charities, which is definitely possible. I mean, Nico’s a rich stockbroker who’s pretty much a self-made millionaire, and that’s always commendable. If Pippa marries him, she’ll never be wanting for money – not that she ever was anyway.

What do you guys think? Do you think Nico proposed to Pippa in India? If they are engaged, expect to hear an official confirmation soon – the royals won’t let the speculation go on forever.