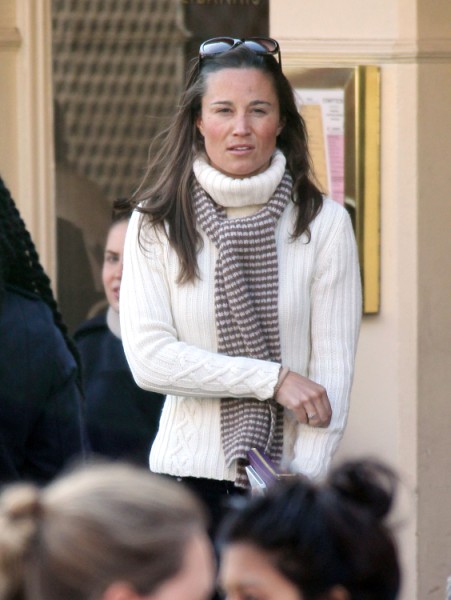 Does Pippa Middleton work fast? Compared to Kate “Waity Katy” Middleton everyone works fast but is this too fast? Reportedly she met Nico Jackson at a club in January of this year. Since then he’s already met the family and even hung out with royalty. They’ve taken multiple vacations and kissed for the cameras. It would just be a Friday night for Prince Harry but this is Kate’s little sister. She’s horribly self-conscious when it comes to her public image. Could a wedding be soon or perhaps an engagement? Pippa Middleton’s friends seem to think so.

Last night on E! News I caught an interview with an editor from Australia’s Woman’s Day magazine. He revealed that a source very close to Pippa said the new couple are extremely serious about each other and, while an engagement hasn’t been announced yet, they are talking about it. It’s virtually the calm before the storm.

While in Switzerland they did do some window shopping at Cartier and Pippa reportedly let Nico in on the kinds of rings she likes. She didn’t buy one then but did pick up a bracelet that was supposed to symbolize love and new beginnings or some other saccharine excuse to buy new Cartier.

So, again, is all this happening to quickly for Princess Pippa? She wants to be married. You can tell she’s tired of being the bridesmaid all the time. And this dude seems nice. He seems normal. And he’s gorgeous with a full head of hair which definitely helps. He could ground her. Pippa wants grounding right now whether she’ll want it in the future is another story. If an engagement happens I bet it would be sooner rather than later. She’s in the mood and he’s of that age at the ripe old 35. This actually might happen this year. It probably won’t be before July though. There’s no way Pippa’s letting Kate’s baby steal her thunder on this one. I’m sensing a late fall or maybe Christmas proposal. That would be lovely and just long enough. Will 2014 be the year of the Pippa Middleton wedding? Cressida Bonas certainly hopes so!