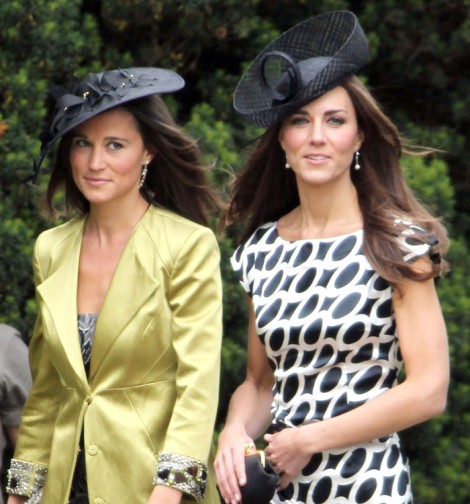 Looks like this won’t be Princess Diana/Sarah Ferguson type of friendship. The tabloids are running wild with stories that Prince Harry’s girlfriend, Cressida Bonas, is flapping her gums and calling Kate Middleton and her little sister, Pippa Middleton, tacky. Is she wrong? That’s debatable. Should she be saying those things before she’s had her perfect princess wedding? Probably not.

But according to Now magazine, Cressida and her older sister (and Prince William’s former love interest, Isabella Anstruther-Gough-Calthorpe, can’t help themselves. I know it’s Now magazine but let’s play along!

A royal source reported: “There’s always been a feeling that the Middletons are from  ’the other side of the tracks’  as they joke. Cressida’s  family have their own family crest  going back through history,  while the Middletons have  just made up their own. On top of that, Wills was  said to be obsessed with Lady Isabella before he met Kate. So you can see there’s been tension over the years. Cress also reportedly called Pippa ‘tacky’ for giggling and flirting with Harry at the royal wedding.”

Who wouldn’t have giggled with Harry on that balcony? It’s Harry! And, seriously, if William was obsessed with Isabella before he met Kate he would have been around 17 at the time. I’m sure both he and Kate are over a teenage crush. Do you see now why we need Chelsy Davy back? She might not have loved Kate but she wouldn’t have started this shitty girl nonsense. She would have grabbed a beer and a smoke and forgotten about it by the morning.

But this is pure tabloid stupidity. Why piss off the future Queen by continuing to call her and her family tacky? Cressida will have to spend holidays and national events as well as vacations with Kate. Why annoy her now? It makes so sense. Pippa, on the other hand, is fair game. But she’s so loved up in Switzerland I doubt she cares about Cressida Bonas’ insecurities. That little 24-year-old might have a little too much time on her hands. Perhaps a full-time job would help. It couldn’t hurt. Besides, it might come in handy when Chelsy snaps her fingers and Cressida’s meal ticket leaves her behind. Why are you keeping us waiting Chelsy!?