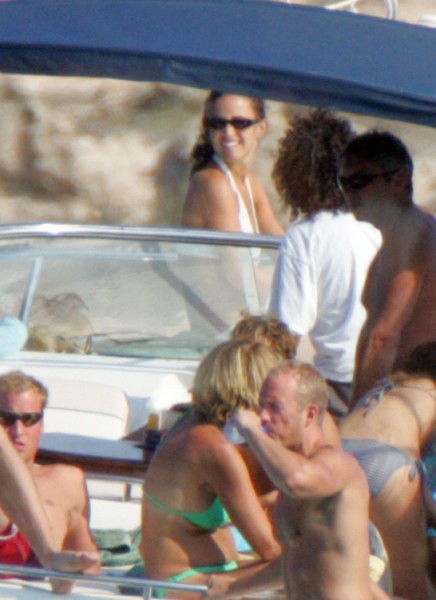 Let’s get to the gossip first then we can discuss the repercussions. Kate Middleton’s uncle can’t wait to host a new generation of Middletons in party happy Ibiza. “Would I play a part in the future monarch’s upbringing? Of course I would. And it’s another young baby growing up to play with, which I’d love to be a part of.”

He also went on to say Kate’s always had to work harder than Pippa in life because things just always came more naturally to the Pips but she “has taken her responsibilities in marriage and job incredibly seriously.” Well, no shit Uncle Gary. He also defends Pippa saying, “I feel so defensive about Pippa. She gets absolutely slaughtered for not working, and then when she does get a job, she gets attacked for doing that too. The poor girl just can’t win. It’s so unfair on her. I wish people would give her a break and let her get on with it.”

Telling, no? He seems to have a soft spot for Pippa and you can probably assume that since Gary feels this way about how Pippa has been treated since the royal wedding, the Middletons, and more importantly, Pippa feel that way too. Maybe all those Pippa Hates the Royal Family stories are more on the mark than I first thought.

I’m actually surprised by this interview though. Uncle Gary has plenty of money – like millions. And he’s planning to write an autobiography but he already mentioned he wouldn’t overload it with Kate and William tales. So I figured he was being good but selling family shit – however harmless – to Hello! magazine is super low class or tacky as Cressida Bonas would say. You can’t blame the second cousin third removed burlesque chick from capitalizing in Playboy. She’s never even met Kate but Uncle Gary has hung out with William. He’s let the couple party with him in Ibiza. He knows things. They might not be super tight but close enough. He’s the lose cannon. Pippa and James are small potatoes compared to Uncle Gary. I’m not saying he did coke with William on the back of his boat (although Uncle Gary did get caught doing something similar four years ago) but, if we know anything about Kate and William, we know they are very private and like to control their own message. Hopefully he’s just bored and felt like a little exposure. This should satiate him for awhile until he’s bored again. Fine. Like I said, it’s harmless enough. Let’s just hope Uncle Gary knows how to handle his money though. A bored and hungry Uncle Gary could be a scary thing to the Middletons. Something tells me his mouth is much stronger than his integrity.

Do you think Kate will be allowing Uncle Gary to babysit anytime soon?