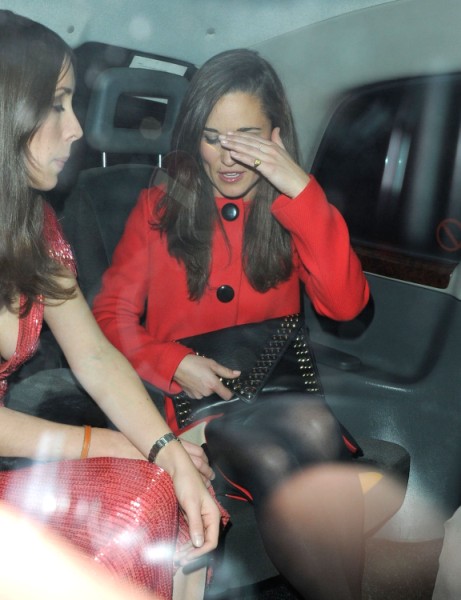 We’ve got some great Pippa Middleton news this morning. Kate Middleton’s little sister is tired of toeing the royal line when she’s not even a royal and got pretty lippy with her big sister during the holiday season over her failed career and social restrictions.

As I’ve already reported, Pippa Middleton’s publishers have pulled the plug on her upcoming two books. She was supposed to follow her party-planning disaster with a budget guide to planning weddings as well as one on throwing children’s parties. (that would have been perfect following the royal baby, yes?). But because of the disastrous promotion debacle following Celebrate, Pippa’s peeps don’t think she’s worth the money. They thought her name would sell the book, since her body couldn’t do it (thanks to the royals), but they were sadly mistaken leaving Pippa an unemployed worldwide laughingstock.  According to a Daily Mail source Pippa’s pissed because she left her decent job as an events manager because she really thought writing was her future but the publishing world won’t waste any more time on her as long as Kate Middleton is dictating her future.

“This is hugely disappointing for Pippa as it leaves her effectively forced to choose between her career and her family…. She is becoming increasingly frustrated and angry that her reputation and livelihood is being affected by the constraints of royal life – especially as she is not a royal herself. In truth, she has had enough of it. She’s not a member of the royal family and is completely fed-up with having nearly every aspect of her life controlled just because her sister happened to marry into the royal family. She feels trapped like a caged animal and it really is getting her down. She says it has to change.”

This is an interesting situation because Pippa wouldn’t have all these opportunities if it wasn’t for her sister’s marital success but it must suck for her. The media is hell bent on making Pippa into the new Fergie. She’s the social climber. She’s the hanger-on. She’s the tacky sister-in-law when, really, the girl just wants to create a career for herself. If the royals take that away from her then the only thing that’s left for her is to marry well. And then the world will vilify her using her connections to marry for a rich title. It’s lose/lose. Look, Pippa Middleton’s books aren’t Martha Stewart material but at least she’s trying. I appreciate that. But she’s got to get out of London if she wants any autonomy over her life and she has to decide if her career is more important than her affinity for the royal perks. She can’t keep trying to please both. It’s just not going to happen because, in the long run, the palace doesn’t care about her or her growth. The palace only cares about its own best interest and will sabotage Pippa as much as it needs to.

I’d love to see Pippa move to New York and make something happen away from under the palace’s thumb. Only then will she get the opportunities and/or respect she craves. But I could easily see her marrying some rich dude from Belgium too. It’s a big decision and it’s unfortunate she has to make it. Kate didn’t have a decision because ever since she was 19 she set herself up to only have one option – Prince William. She never fooled anyone into thinking about a career. I almost feel more sorry for Pippa in that instance. No wonder she’s a little lost at the moment. That’s a sucky older sister example to look up to, princess or not.

Is Pippa Middleton trapped? Is she just whining or do you think she has a point?