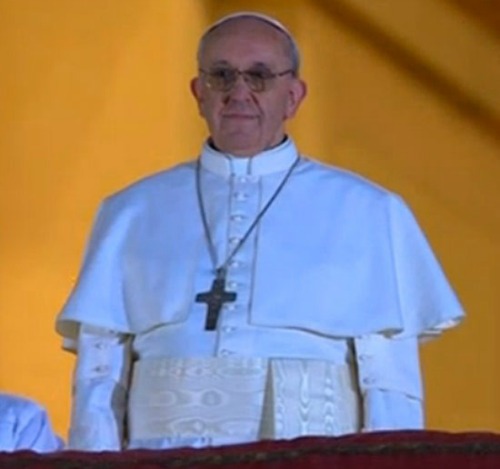 At 7pm Roman time the bells rang and the white smoke emerged from a chimney above the Sistine Chapel. The 115 cardinals of the conclave have elected the successor of Pope Benedict XVI.

The decision on electing the new pope comes 5 days after the start of the conclave and was elected with the fifth ballot. Cardinal Proto-deacon, Jean-Louis Tauran spoke from the balcony of St. Peter s Basilica to crowd in St. Peter’s Square. Per CNN here is the translated announcement in English “I announce to you a great joy: We have a pope! The eminent and most reverend lord, Lord Jorge Mario Bergoglio, Cardinal of the Holy Roman Church Bergoglio, who has taken the name Francis.”

The man elected is Cardinal Jorge Mario Bergoglio. He is an Italian from Argentina. Cardinal Bergolio, the former Archbishop of Buenos Aires, is the first cardinal outside of Europe to be elected Pope in the modern era, and the third consecutive non Italian Pope. He is also the first Jesuit priest to be elected Pope. Cardinal Bergoglio has taken the name Francis after St. Francis of Assisi. He is the first Pope to take the name Francis.

Pope Francis came out the balcony to greet the crowd in St. Peter’s Square.  He gave a blessing.  Then Pope Francis addressed his audience.  Per CNN here is the translation into English:  “As you know, the duty of the conclave was to appoint a bishop of Rome. It seems to me that my brother cardinals have chosen one who is from far away, but here I am. I would like to thank you for your embrace, also to … the bishops, thank you very much. First and foremost, I would like to pray for our emeritus pope, Benedict XVI. Let us pray all of us together … so that he’s blessed by the lord and guarded.”  Pope Francis closed his presentation by reciting the Lord’s Prayer and then re-entered the Basilica.

Pope Francis follows the church’s most conservative teachings and is considered a straight shooter. The Pope’s Twitter account is active once again, after no activity following Pope Benedict’s resignation.  You can follow his at @pontifex. Pope Francis’ first tweet is “Habemus papam franciscum,” this is latin for We have Pope Francis.