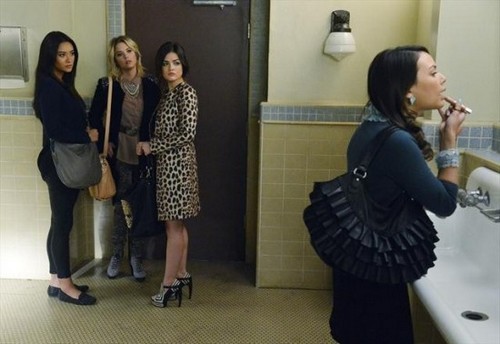 Tonight on the ABC Family PRETTY LITTLE LIARS airs called “Will the Circle Be Unbroken?” On tonight’s show Spencer hasn’t been herself lately, but has she had enough to just disappear? Could “A” have done something to her?  Did you watch last week’s show? We did and we recapped it here for you!

On last week’s show the pretty little liars were looking for answers in all of the wrong places.   Spencer was finally ready to talk, but Emily was not so ready to accept what she had to say.  Did she heed Spencer’s warnings or did Emily go off to find her own answers down a path “A” has designed for her? Hanna, on the other hand, was preoccupied with helping her mother after Ashley was involved in a hit-n-run accident. Now having a new secret to hide, Hanna wondered if “A” had something to do with it after all.

On tonight’s show With Spencer missing, Aria, Emily and Hanna search for clues to where their friend may be.

Spencer hasn’t been herself lately, but has she had enough to just disappear? Could “A” have done something to her? These are all questions that Aria, Emily and Hanna are asking themselves when Spencer goes missing. But when it turns out even her family doesn’t know where Spencer has gone to, the girls frantically search for answers hoping their worst fears aren’t true. But where Spencer does turn up at, maybe she doesn’t want to be found.  Meanwhile, Emily gets the surprise of a lifetime when she meets Gold Medalist Missy Franklin.