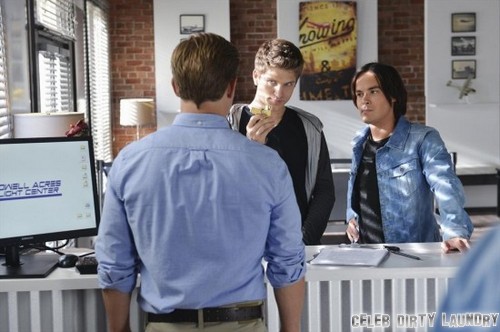 Tonight on the ABC Family PRETTY LITTLE LIARS continues with the fifth episode of its sixth season called, “Crash and Burn, Girl!.” On tonight’s show Hanna faces her new reality. Did you watch last week’s season 4 fifth episode? We did and we recapped it here for you.

On last week’s episode Mona was back after her absence in last week’s episode as she tried to prove her trustworthiness. Meanwhile Aria’s  perpetually missing brother Mike (Cody Christian) affected her while Toby and Spencer headed to Ravenswood.  Hanna had some explaining to do to her parents and the police after she’s found with something she shouldn’t have.  Emily tried to help Hanna, only to have “A” turn the tables.

On tonight’s show Caleb and Toby team up to investigate “A” and what really happened the night of the lodge fire and encounter a source that points to a new possible identity for “Red Coat.” Hanna struggles to act like everything is normal and her friends are unsure about how to help her. Aria worries about Mike’s behavior in light of an incident at school and Ezra struggles with how he now fits into her life. Meanwhile, The Liars are determined to find a new suspect in Wilden’s murder and their tactics have unintended consequences. And, “A’s” new plan threatens to send everything crashing down around one of the Liars.

Emily and Spencer are doing dishes at Hanna’s but there is still some tension between the two. Despite the secrets and snide remarks the girls and Aria are staying to try and help Hanna through her mom’s arrest. Hanna is feeling a little better after talking to Caleb yet she doesn’t know what he’s really doing. Caleb has teamed up with Toby to investigate “A”.

Even though the two are supposed to be a team, Toby is still keeping the truth about his mom to himself. Otherwise the two guys are now starting to seriously consider if Allison is alive.

The girls aren’t weathering so well either. Emily’s mom is pushing her limits financially in order to get Emily into physical therapy. She thinks it can truly help Emily but then on the heels of her being supportive she asks her daughter to take a breather from Hanna for a while. Emily of course ignores her mother trying to save appearances and remains standing by her friend. She knows Hanna needs her. Hanna does need her and not just to tell people to stop staring. She’s almost given up and mostly everyone is starting to see that. Even Ezra.

Aria’s brother is facing some trouble. The guy that kissed Aria, Connor, is claiming Mike vandalized his car even though he only saw the jersey and not Mike’s face. Aria’s dad finds out about all of this and decides to have a little father son chat. Aria on the other hand doesn’t believe her brother did it. She believes “A” was behind it.
“A” has gone after Hanna’s mom, Emily’s parents, and now Aria’s family. They need to be proactive and Emily knows just where to start. She swiped Wilden’s keys off of her mom’s desk. Emily, Spencer, and Aria are searching Wilden’ apartment when the phone goes off. They ignore it but it might have been the person watching them from the window.

The girls do find something though. In a box of imported meats there was a note from “A” saying she/he would see them later at the barbecue.

Toby and Caleb ended up finding some info as well. They investigated the flight plan of the mysterious pilot from the night of the fire. They thought at first they couldn’t get anything but Toby and Caleb do realize Nigel is involved somehow. Nigel is the one that has to record flight plans and he was just a little too helpful earlier when he was talking to the guys. There has to be a reason why they keep running into smoke and mirrors trying to find out about the plane. Nigel was actually paid to fake a flight plan. When the guys try to question further; Nigel flees. Nigel makes his getaway without knowing Caleb had grabbed his phone.

Also they did get a name. It was Cece. Later after they fill in Spencer she tells them she saw Cece at Radley.Toby is now curious whether Cece was the blonde girl his mom had to stay away from.

Aria’s brother is going to be fine at least. Ezra helped the vice principal into not expelling him. Aria and Ezra still have feelings for each other although they both have tried to move on. Is there a chance they can get back together?

In an effort to help her friends, Emily got her mom in trouble. She walks into the police station just in time to see her mom get yelled at by her bosses for losing the key. Her mom gets suspended from work. Emily is upset about what she did but she feels so much worse when “A” threatens her for “crashing Wilden’s.

Someone drives a car through Emily’s living room. Was it “A”? It must be or why else would “A” send he a gift card to a home depot.