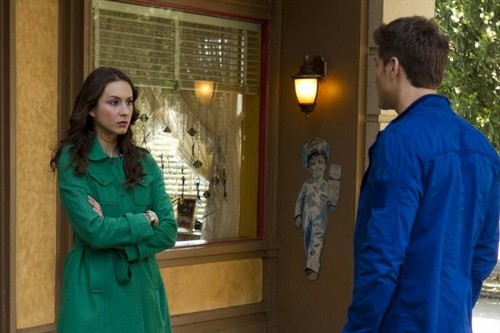 Tonight on the ABC Family PRETTY LITTLE LIARS continues with the fifth episode of its fourth season called, “Under the Gun.” On tonight’s show Hanna’s attempt to protect her mom gets her into hot water with the police. Did you watch last week’s season 4 fifth episode? We did and we recapped it here for you.

On last week’s episode Spencer and Emily made plans to visit a nearby college, but they had a very different agendas for their time spent on campus. Spencer’s singular focus in figuring out Ali’s apparent connection to the school contradicted Emily’s real fears about her plans for after she graduated. And after a stinging attack by “A”, Aria and her brother Mike didn’t see eye to eye regarding what’s best for their parents.

On tonight’s show Mona will be back after her absence in last week’s episode as she tries to prove her trustworthiness. Meanwhile Aria’s  perpetually missing brother Mike (Cody Christian) will affect her while Toby and Spencer head to Ravenswood.  Hanna has some explaining to do to her parents and the police after she’s found with something she shouldn’t have.  Emily tries to help Hanna, only to have “A” turn the tables.

Cicero College visit was a bust. Hanna was taken back to Rosewood where she’s was delitefully informed the gun would be taken for ballistics. Fearing for her mom and what this could mean she gets a text from “A”. Its threatening Hanna not to tell her parents about him/her or else he/she will frame them both. Because Hanna’s mom, Ashley is swearing she never brought the gun into the house.

The rest of the girls aren’t faring easy either. Spencer and Emily are able to make up, after Spencer acknowledges she’s a bulldozer of course. But then they have to deal with arrival of two nemeses. Shanna transferred into Rosewood just so she can take Emily’s spot on the swim team and Mona’s back. Apparently she was tracking down her RV and she found out the truth. Toby took it and Spencer covered for him.

Emily and Aria are upset Spencer kept secrets from them but they have more pressing matters. Hanna told them how she fell into “A”’s trap so the girls want to see if they can help her family. The one thing that can really is the dashboard camera. Yeah it shows Ashley hitting Wilden with her car but is also shows Jenna and Shanna picking him. Whether to hurt him or to help is unknown.

Meanwhile Spencer wants to win some trust back. She contacts the sorioty house they visited at Cicero. She hears about Ms. Griswald. She tries to bring the information to Emily in order to win some brownie points but that doesn’t work. She has to find Ms. Griswald without Emily; she decides to take Toby then. They track the older women to the spookiest little town. They aren’t any street signs and no one would help them with directions.

They find the house where Ms. Griswald had listed as her address but the gardner informs them that the lady doesn’t live. He serves a master was how he phrased it and the moment the young couple depart he starts to make a phone call.

Aria is up to something. It doesn’t have anything to do with “A”. It’s actually about her brother. She befriends on of his teammates. Her brother sees this and scoffs at her sudden new found friendship. Whatever she was trying to do isn’t working with Mike. But it is working unexpectedly with his teammate. The poor guy tried to kiss her only to get shut down.

Later her brother confronts her about supposed hook up with his friend. Aria is furious and chases the guy down in the lockeroom. She tries to get to him admit that nothing happened but he’s in front of his friends. He calls her a slut because after all she did sleep with her teacher. She’s about to leave when Ezra who followed her in tells her she shouldn’t be in the boys’ lockeroom. He tries to comfort her yet she rejects him. He can’t be the one to make it better anymore.

Emily goes to Mona. She claims she wants in on any and every info Mona may have. However Mona informs her that her well is tapped out. She doesn’t know what “A” is planning. She’s just as much worried as everyone else.

Spencer and Toby are about to leave when they see Ms. Griswald at the hairdresser’s. Strangely the woman denies everything. She claims they have the wrong person. Toby believes they should give up which only serves to infuriate Spencer especially when she’s been trying to him the very same thing. He goes off to find food and while she’s fuming outside she sees a group of people heading to a memorial. She follows them and sees Shanna also attended. Spencer runs to get Toby but Shanna is already driving off. Toby and Spencer are just about to follow Shanna in the car when a bird either flew or was thrown at their window. The stopping thinking about Shanna and are now confused over the bird with a broken neck.

Hanna’s house was having too much drama so she took a walk. She returns to find her father drinking scotch. He wonders why she didn’t come to him for help and she tells she didn’t believe she would be welcomed.

Aria does have a hero. Her brother has finally forgiven about their mom and he knows he should have taken her side with the team. Someone wearing the team jacket is seen destroying the little twerp’s car. The person also wrote liars across the side.

Spencer, Emily, and Aria are at the Brew . Spencer has filled them in on finding Shanna. Just when they’re about to talk it over the new detective comes in. She wants Emily to follow her to the station. A video was sent in with someone wearing an Emily mask holding a sign that says guilty. The message on the notes looks just like her handwriting.

Hanna’s mom gets arrested. Her fingerprints were on the bullets.