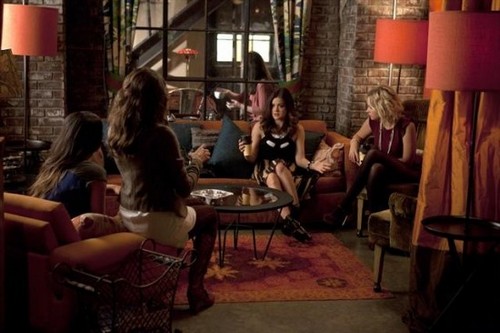 Tonight on the ABC Family a new episode of PRETTY LITTLE LIARS airs called “Mona-Mania!.” On tonight’s show after the shocking events at the school marathon, Aria, Emily, and Spencer are sure now more than ever that Mona is up to her old tricks.  Did you watch last week’s show?  We did and we recapped it here for you!

On last week’s show Radley Sanitarium gaveMona a clean bill of health and she was headed back to the halls of Rosewood High, much to the Liars’ dismay. With their former tormentor now back in their everyday life, Aria, Emily, Hanna and Spencer took very different views of the “new” Mona.

On tonight’s show Aria, Emily, Hanna and Spencer are sure that Mona is up to her old tricks again, but can they prove it?  Hanna, still holding out hope for her former friend, is not so sure. With Mona seemingly popping up everywhere, it sure seems like she has a plan. But with no real evidence to prove Mona is back to her evil ways, how can the Liars prove what they believe to be true?  Meanwhile, Aria’s fears about her father grow stronger when something vital that is hidden in her room goes missing.

Tonight’s recap: Mona and Hannah go sneaking around in the basement and find Ali’s journal. Afterwards, Aria says she spent the night tossing and turning over the secrets she’s been keeping.

Mona says Harold is stalking her because she was nice to him. Hannah has her doubts and thinks there’s more to the story.

Hannah wants to talk to Lucas. She knows it was him in the basement. He doesn’t think that they should be seen together because of Mona. Lucas says she should be freaked out. Hannah offers to help him. Lucas says he can’t. Hannah wants Lucas to promise he won’t pull another stunt like he has before,

Emily thinks it would do her and Paige some good to take their mind off recent events.

Ella is upset that people are forgetting that a young girl was killed in the middle of the media blitz. Ella apologizes to Aria for what happened; she and Byron thought they had a night off from the kids. They were enjoying themselves while something terrible was happening.

Mona is going to be joining the school council to Spencer’s annoyance. Spencer and Mona will both be running for Team Captain. Mona says that she was only playing dumb but is ready to show the whole school what she’s made of. Half of the board votes for her which results in a tie. There will now be a quiz off. Mona sends Spencer a text: “Quit while you’re ahead bitch”.

Spencer tells the girls that she’s not going to be scared off. Hannah thinks maybe she should back off. Mona approaches. She thanks Spencer for being such a good sport. Spencer says she got her text. Mona says she’s not allowed to have any access to a cell phone. Hannah doesn’t know if they can believe anything she says. Mona says she’s trying and runs off in tears.

Meredith apologizes to Ella for accusing Aria of hurting her. Ella is sure that they can be professional.

Aria figures out that Bryon knows what they’ve been up to.

Spencer knows that Mona is baiting her since she could’ve chosen any other team to join. Toby is helping her to study but get a phone call and leaves.

Lucas tells Hannah that he’s leaving Rosewood High and that Mona won’t be able to get at him. Lucas says that Mona is still blackmailing him. Lucas says he was selling the test answers to anyone with cash and that’s what Mona has over him.

Aria overhears Byron and Meredith arguing. Aria sees Bryon grab Meredith by her arm. She wants to know what’s going on. He says everything is fine.

Paige freaks out while she and Emily are driving. Paige says all she can think about is when the next bad thing will happen.

Mona says she wants to send Brad a get well card despite the team having already sent flowers since there’s no such thing as too much encouragement.

happened between Byron and her. Meredith ays she caught Bryon going through her things. She decided to go on her own search. She found Aria’s letters in his possession. Meredith says that Byron came to see her the night Alison disappeared.

Spencer dominates the quiz off.  At the end of round two, Spencer is up by two points. Spencer has a brain freeze and fumbles through her final answer. Mona wins.

Paige’s car gets a flat while they’re out in the middle of the road. They realize that someone slashed the car. Emily starts to chase the masked man.

Aria and Meredith return to the house. Byron apologizes for scaring Meredith earlier.

Spencer tells Hannah that she blew it and lost. Hannah tells Mona that she is onto her. She feels like she wasted months defending and feeling guilty over Mona. Hannah doesn’t want anything more to do with Mona.

Hannah gets a text that says it was a mistake to cut Mona off. Hannah says she is not going to live her life in fear. Spencer says she got cocky and that Mona can now take them down in the open.

Byron is followed as he leaves, walking into Toby’s trap.