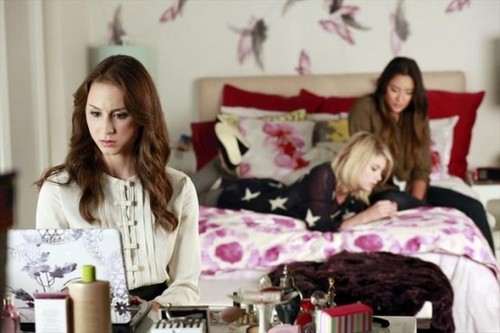 Tonight on the ABC Family a new episode of PRETTY LITTLE LIARS airs called “Misery Loves Company.” On tonight’s show there are surprises abound for Aria, Emily, Hanna and Spencer. Did you watch last week’s show? We did and we recapped it here for you!

On last week’s show Aria, Emily, Hanna and Spencer were sure that Mona was up to her old tricks again.  Hanna was still holding out hope for her former friend, was not so sure. With Mona seemingly popping up everywhere, it sure seemed like she had a plan. But with no real evidence to prove Mona is back to her evil ways, how could the Liars prove what they believe to be true?  Meanwhile, Aria’s fears about her father grew stronger when something vital that was hidden in her room went missing.

On tonight’s show Aria is down for the count when sidelined by the flu, so Hanna and Emily are on their own to follow up on a new clue. Surprisingly, Meredith steps up to help take care of Aria while her father is away, but when it starts to look like Meredith may have ulterior motives to her nursing Aria back to health, Hanna and Emily turn their attention towards saving their friend. Is Meredith just trying to start anew with Aria and be her number one fan, or is there reason for her friends to be concerned?  Meanwhile, Spencer takes a break from all the sleuthing to surprise Toby for their anniversary.

Lots of drama is brewing right off the bat on tonight’s episode. Aria is sick on the couch with what seems to be the flue and surprisingly Meredith is the one helping her get through. She also mentions those missing diary pages which kind of indicates that her true intentions are a bit shady.

Hannah asks Emily to follow Caleb for her. She over heard part of a conversation that he supposedly had with his mother and it didn’t wash. Meredith returns to school after visiting Aria on her lunch break and she seeks out Aria’s mother to tell her that she’s doing much better. Her mom rushes off to call Aria then saying she had been afraid of waking her earlier.

Hannah heads to the designer boutique for an interview with Carine and once she arrives she rings the bell and walks in. The lights go out and she ends up playing a game of cat and mouse with someone, weaving in and out of mannequins. She ends up on the floor and as the person leaves she receives a text message saying next time she’ll be left faceless too. Hannah picks up a key off the floor and goes to discuss everything with Spencer and Emily.

Aria is sleeping and she has either a vision or a dream of Allison in her room. Ally takes a doll with the diary pages in it and she tells Aria that she made stuff up to get her hands on money. She also tells Aria not to drink the tea that Meredith gave her. Aria wakes and tries to leave her room but can’t get out. Her door has been locked.

Aria dozes off again and this time wakes in the dark with Meredith hanging over her. She admits to drugging Aria so that she could rip the house apart looking for the pages. She still hasn’t found them and is losing patience. Aria manages to trick her and bolt past her out the door.

Spencer and Hannah go to the house and check on Aria and the run into Meredith. She tricks them into looking for Aria in the basement and there they find her, laying at the bottom of the stairs. Of course Meredith has locked them all in.

Byron comes home and Meredith tells him that Aria knows everything. He creeps down to the basement and swears he won’t hurt the girls. He flashes back to his argument with Allison but we still don’t see whether or not he killed her. At the same time Toby, dressed in head to toe black slinks in and Spencer catches him.

Byron continues his talk with Aria. He says it was clear when he found Allison’s body that she was murdered. He liked how they had no suspects. Aria tells him she was afraid to talk to him about it and she’s not completely convinced he’s innocent. Her dad decides to tell the police everything in the hopes that they will find proof that clears him. Aria tells him that she believes him. Tune in next week to see if the police catch up with Meredith!