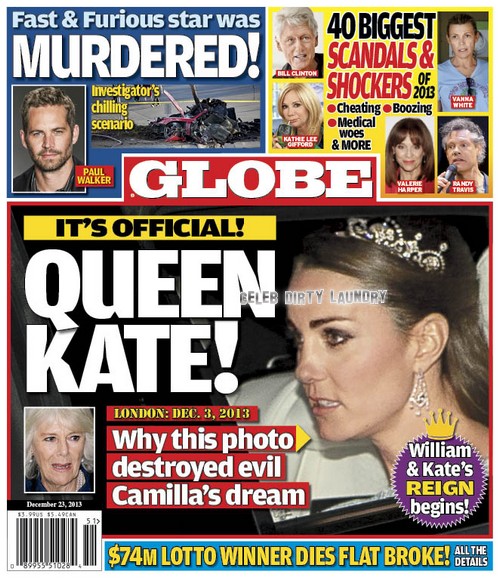 While many royal watchers were under the impression that Prince Charles has lived his whole life, anxiously awaiting the day when he will be crowned King, he recently made it clear that this couldn’t be further from the truth. As his 65th birthday came and went in November Charles was absolutely relieved to finally decide that he’s not going to fight for the title that is technically his birthright.

According to the Dec. 23rd print edition of GLOBE magazine Charles is well aware of the fact that his mother, Queen Elizabeth would rather see his son, Prince William and Kate Middleton take the throne next when she abdicates next year. He understands the level of respect and authority that his son commands with the commoners and Charles also knows that by marrying Camilla Parker-Bowles, he has reduced himself to a bad joke. Even though he is technically next in line for the crown Charles understands that Camilla will never be fit to rule as Queen.  Whereas Kate Middleton is adored, Camilla is despised. That truth likely made it easier for him to decide that he will support his son as the choice for the next King.

Obviously, Camilla has been furious for months even thinking that Charles may opt not to fight for his title. Learning that his decision was made certainly hasn’t helped their already shaky marriage. Now that Cami realizes she’ll never be Queen she’s hoping for a hefty divorce settlement instead. Do you think the royals will pay up? Will Charles lose the crown and then pay Camilla off just to be free at last? Tell us your thoughts in the comments below!