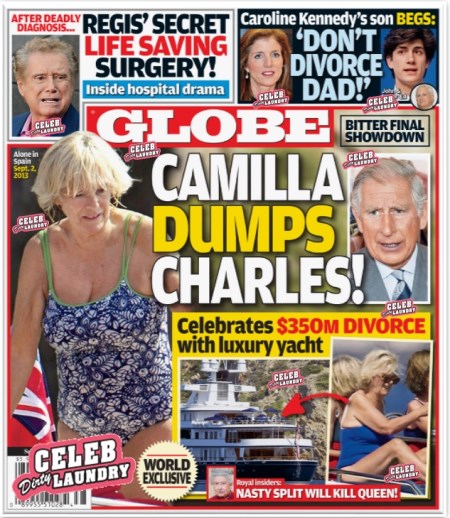 Oh boy, I think anyone following the messy dysfunctional royal family knew that this was going to happen! Of course I’m talking about the ongoing war between Camilla Parker-Bowles and Prince Charles. It must really stink to hang on for over 30 years as a mistress and ultimately realize that you can’t stand the man that you’ve wasted your whole adult life on! According to the Sept. 23rd print edition of GLOBE Magazine that’s pretty much exactly the position that Camilla finds herself in now.

Charles is refusing to challenge Queen Elizabeth’s plan to abdicate and give the throne over to Prince William and Kate Middleton. Obviously, Charles is next in line but he is quite the laughing stock and his repeated blunders have assured the Queen that William is the man for the job. William is well-respected and very much in touch with the needs of the British people, making him a better fit. Camilla is bound and determined to be queen and absolutely furious that her husband won’t fight for what she believes is rightfully his, or theirs. The latest fight caused Camilla to storm out threatening that the marriage is over.

Rather than grieve her miserable relationship, Camilla was spotted yachting in Spain looking like she hadn’t a care in the world as she plans her $350 million divorce. GLOBE has been talking about the war between Camilla and Charles for months now and it finally looks like things have come to a bitter standoff with a cold front that’s not likely to pass any time soon!

Also in the Sept. 23rd print edition you can read up on Caroline Kennedy’s latest bit of drama. She has wanted out of her marriage for some time now and was looking to Obama for an ambassadorship that would make her have to uproot herself. Well Japan was a good choice for Caroline and while she may not want to divorce just yet she wanted a legitimate reason to take her away from her once happy home. Apparently her son John has caught on to what’s happening and is begging his mother to reconsider her plans.

GLOBE is reporting in this issue that Regis Philbin has had life saving surgery after a deadly diagnosis – all the inside details of the hospital drama will be in the print editon.

As usual GLOBE features some really hot stories that you’re not going to see covered properly elsewhere.  Will Camilla follow through with her threat to divorce Charles even though the scandal will surly be too much for a gravely ill Queen Elizabeth?  You know that the answers to what is really going on behind the palace walls are found only in GLOBE. This week’s print edition provides a wealth of information and great reading so do what I’m going to once I finish work and that is to pick up a copy of GLOBE and sit back and enjoy!