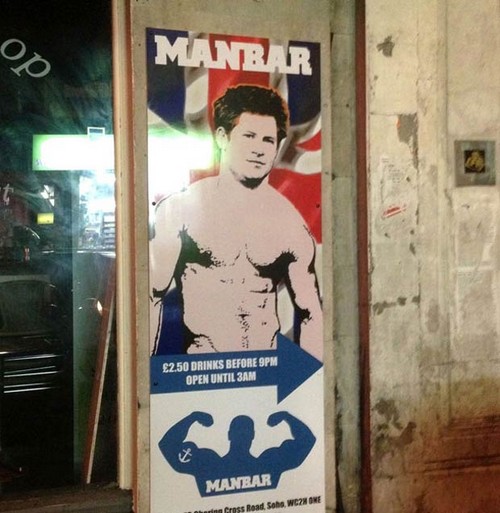 This is why Prince Harry will always be cooler than the rest of his stuffy family, whether he wants to be or not. Just weeks after the news that Harry had defended a gay soldier from verbal and possible physical abuse, Prince Harry is now being used as a poster boy for a gay bar.

According to reports, a [photoshopped?] image of a shirtless Prince Harry is being used to promote a gay bar called ‘Manbar’ in London.

What?! Yeah, I had the same reaction. But really, it makes complete sense. You want people to come to your bar, what better way than to entice with them with half-naked pictures of Prince Harry? Everyone knows who he is, and I challenge you to find one gay man who doesn’t find Prince Harry awesome and adorable.

That being said, I’m pretty sure this isn’t going to be allowed to continue. The Royal Family is very stringent on how their image is used, and I can only imagine the Queen’s reaction if she found out about this. So the poor, overworked PR people for the palace [who are already on overtime right now thanks to Kate Middleton’s impending birth] will have to make sure she doesn’t find out, and will probably make Manbar take their image down. Sadly, most public figures don’t allow their likeness to be used without their permission and while I doubt Harry himself would care, the royal family didn’t earn their uppity reputations for being cool about this kind of stuff.

What do you guys think of Prince Harry’s shirtless image being used to draw customers to Manbar? Some people find this to be a gross tactic to entice customers, whereas others find it hilarious. What camp do you fall under, and do you think it should be taken down or left alone? Let us know in the comments.