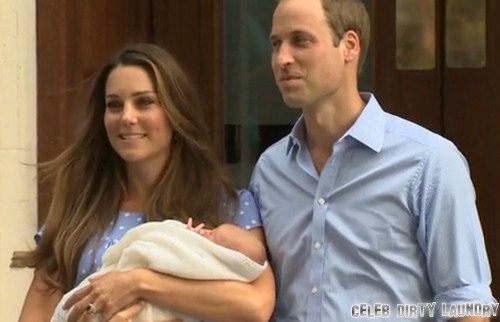 Kate Middleton gave birth to a healthy baby boy yesterday. That put a lot of people — who’ve been waiting for the birth for weeks — at ease, but now everyone’s itching to get a glimpse of the beautiful new prince! Just now, the royal baby boy (who hasn’t been given a name yet and probably won’t have one for a while) made his way out of St. Mary’s Hospital Lindo Wing in the arms of Kate.

There was a live feed focused on the front doors to the Lindo Wing, which has been the site of endless crowds for the past few weeks. The feed was rolling for over 24-hours before the baby emerged from the hospital. Police and barriers were situated around the perimeter to ensure the safety of the baby and family emerging from the hospital.

Yesterday, the royal announcement made it’s way out of the hospital and was taken to the Queen. The announcement was then posted on the Royal Easel, which is situated right outside the palace.

There’s a lot of commotion and raucous all over London right now, so I imagine everyone in the royal sector is just glad Kate’s baby’s safe and sound and healthy healthy healthy. They’re probably eager for a bit of rest before they have to continue their publicity efforts. The baby hasn’t been named as of yet — and everyone’s preparing themselves for an arduous wait, as the name of a royal must be given careful thought.

What do you think about the royal baby? Everyone, including Prince William, is ecstatic and they couldn’t be happier. The pictures have been procured from the LIVE feed and haven’t been taken by official photographers; rather, they are the VERY first glimpses of this new lil’ royal. Stay tuned in the coming days and weeks for more pics of the child!