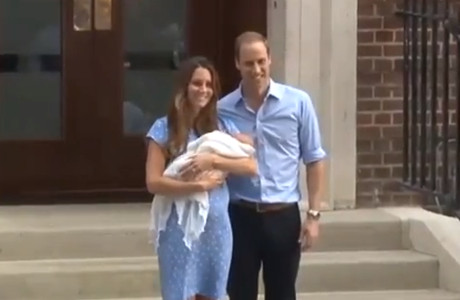 Kate Middleton and Prince William‘s #RoyalBaby has arrived to thunderous celebrations all over the world. They welcomed a healthy baby boy, 3rd in line to the royal throne, into the world and he couldn’t be healthier. Kate Middleton is truly living every girl’s dream and fantasy: she married a real life prince. Kate is from a normal regular hard working family, and the Middletons squashed media speculation and the “no-hospital visit” rule by showing up at the St. Mary’s to support their new grandson.

According to the Daily Beast’s The Royalist: How fantastic to see Carole and Michael Middleton enter the hospital in London this afternoon to visit their new grandchild.

While Prince Charles blithely continues his tour of York in Northern England, adamant that he will stick to the Royal Family’s ludicrous “no-fuss” policy which involves not visiting each other when they are in hospital, Carole and Michael show how things are done in the real world.

No wonder William calls Mike “Dad”. The Middletons have faced ridiculous levels of abuse for being too posh, too rich or not posh or not rich enough, but here’s the facts – a pair of very successful middle class business people are now the grandparents of the future King.

Carole and Michael Middleton are caught up in the hype, but their reasons are instinctive. Rather royal or not, this baby is an extension of themselves. Kate also needs to see her own mother to provide reassurance and support in her new role as a parent. The Middletons act of abrasively facing the public and scrutiny to welcome their first grandchild is as royal as it gets.

Check out the picture below!