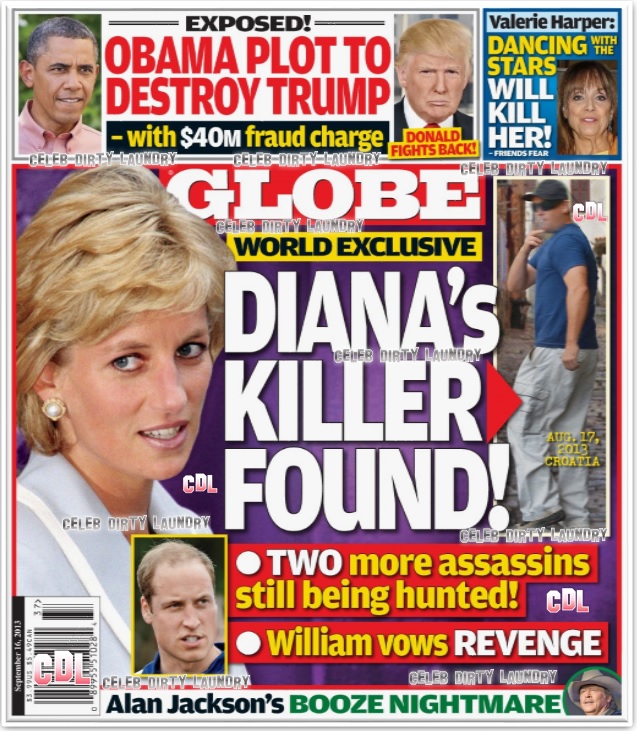 Imagine finding out 16 years after your mother’s death that what you thought was a horrible accident was a perfectly planned and meticulously executed homicide. That’s exactly the situation that Prince William finds himself in. Shortly after the birth of his son, Queen Elizabeth gave him a dossier filled with investigative details on Princess Diana’s death, things that prove that she was assassinated in that Parisian tunnel. According to the Sept. 16th print edition of GLOBE Magazine, William is vowing revenge on those responsible and I suspect he’s not the type of man who’s wrath you would want to feel.

William is also furious with step monster from hell, Camilla Parker-Bowles who is suggesting quite loosely that William isn’t Prince George’s biological father. She claims a random sperm donor technically fathered the child making him not a legitimate royal. Camilla is demanding a paternity test be done because if for some reason William isn’t the biological father then George wouldn’t be an heir to the throne by bloodline. Camilla is furious at the thought that William and Kate Middleton could step past her and Prince Charles in line to the throne since they delivered the Queen another heir. Disproving paternity might make the queen think twice about choosing William over Charles – at least that’s what Camilla is praying for.

William is enraged by the whole thing and wouldn’t mind if Prince Charles was somehow connected to his mothers death – a notion that has long been rumored because it would give him a reason to obliterate Camilla as well.

GLOBE Magazine is one of the few weekly publication’s to dip its toe into political waters on a regular basis and this time around it’s taking a close look at President Obama and Donald Trump. Apparently there is no love lost between the two men and Obama is conspiring to ruin Trump with a $40 million fraud charge. Do you think anything will come of this dispute between the two powerhouses?

Valerie Harper showing true grit will be competing on Season 17 of DWTS with a host of big celebs – but GLOBE fears that the strain could prove to be the death of her.

How about Princess Diana’s death all of those years ago? Are you beginning to believe that GLOBE is onto something and that she was really murdered? One thing you can trust is that GLOBE will not stop investigating and reporting back to us until the case is solved.  I’m waiting impatiently to read exactly what William plans to do about his mom’s murder? How will he get his revenge?  GLOBE is what I’ll be reading this evening as soon as I’m done with work and at home relaxing.