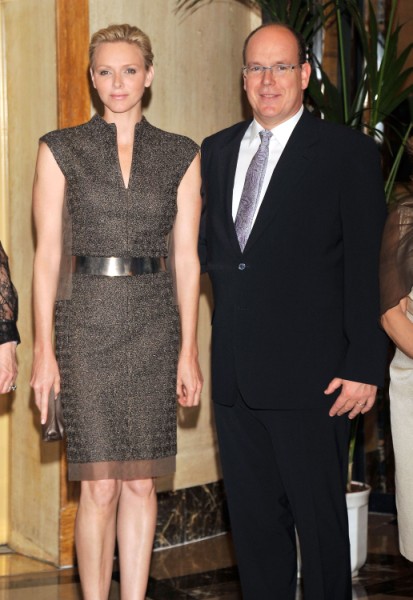 Charlene Wittstock, a.k.a Princess Charlene of Monaco, a.k.a. the almost runaway bride of Monaco, isn’t talked about too much around here or anywhere in America in general which is odd considering the Grace Kelly connection. You’d think she and Kate Middleton would be pitted against each other constantly but it’s rarely done. Both women were commoners and both married heirs to royal families at about the same time. The only real difference is that Prince Albert is head dude and Prince William and Kate have to wait for a few people to die first. Still, even while being lower down the royal food chain, it feels like Kate and William have always had more pressure put upon the – especially to procreate. Britain, undoubtedly, takes it’s royalty much more seriously than Monaco does and perhaps that’s being exemplified in the way Princess Charlene has been able to make her baby decisions since entering the family.

While in Durban this week on business for her Princess Charlene of Monaco Foundation, Charlene was asked why there haven’t been any babies yet and she actually answered. “I think I needed a bit of time to settle in and adjust. I don’t put any pressure on myself. It’ll happen. If it happens, it happens. I wanted to get my foundation launched. I wanted to get the next couple of months sorted out and I can really take a rest. We had a big wedding. It was a big adjustment after that. Now I’m settled and I think kids will come.”

First of all can you imagine someone asking Kate that question? It would never happen. And the whole not putting any pressure on myself thing is so bizarre. Kate Middleton is somewhere with a really confused look on her face.

Now, Charlene is 35 and Albert has no heir of his own (although he has a few illegitimates hanging around). I have a hard time believing they are taking this whole thing so casually. If what’s she’s saying is true then it’s incredibly kind of the royal family to allow her to get her bearings first. Kate Middleton had that transition period too but it was very scheduled and much shorter. But you’re trying to tell me a 35-year-old royal bride isn’t freaking out about producing an heir? Bitch please. Perhaps I’m being too cynical. Perhaps Charlene is truly the modern princess. But I just can’t shake the fact that she’s not knocked up yet because her husband looks like Shrek and acts even grosser. Just saying…. Something odd is going down in Monaco.

What do you think? Why isn’t Princess Charlene pregnant yet? Is that monarchy just more relaxed or is her husband as repugnant as well all assume he is? OR could it just be plain boring fertility issues?