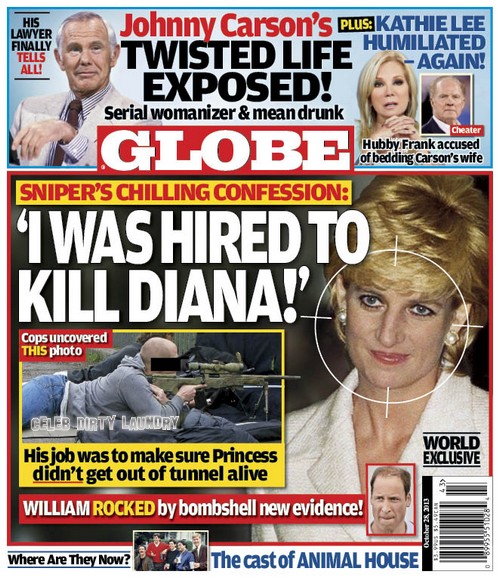 I have to admit, I really do tend to believe that Princess Diana was assassinated in that Parisian tunnel 16 years ago and what has followed amounts to a 16-year cover up. Some think the royals were behind it and wanted her silenced because she was pregnant with Dodi Al Fayed’s child. Others seem to believe that her work with landmine organizations rubbed people the wrong way because their shady business operations were put at risk and so a hit was ordered to remove her.

GLOBE Magazine has been on top of this fluid story for months and in the Oct. 29th print edition they have an interview with the sniper who claims her was hired to kill the people’s princess. It was his job to make sure that Diana’s car ride through the busy tunnel was her last and apparently he is really good at his occupation.

Prince William was recently handed a dossier of information connected to Queen Elizabeth’s private investigation of the crash. She also thinks that the original findings weren’t correct and wanted answers herself. Passing this info onto William makes complete sense and as GLOBE has reported in previous issues, he fully intends to avenge his mother’s death.

There are so many twists and possibilities in this story, aren’t there? Do you think that William will eventually get to the bottom of things and will this sniper really be at the heart of the matter?

If you’re a Hollywood fan then you’ve no doubt been fascinated by Johnny Carson’s pretty twisted life. While he was a heavyweight in Hollywood he wasn’t exactly the nicest guy. It seems Johnny was a womanizer and a mean drunk. Not to mention that Kathie Lee Gifford‘s husband Frank Gifford allegedly bedded Johnny’s wife!  How humiliating for Kathie Lee. In the Oct. 29th print edition of GLOBE they discuss some of the recent confessions from those who played with Johnny before he died.

Do you think that Diana was murdered? GLOBE has been right on top of this issue and has all of the latest details for you in this week’s print edition. Now that one of the assassins has been discovered we can expect the case to be solved shortly.  With Prince William involved in bringing his mom’s killers to justice and GLOBE’s inside palace sources hard at work we know there will be plenty of great reading this week! I’m certainly looking forward to enjoying my copy of GLOBE and I’ll report back to you on some of the hot stories I read.