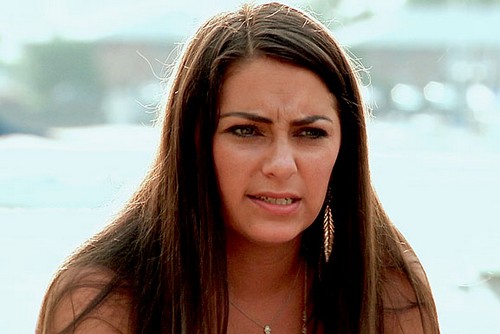 Our favorite new Bravo show this season PRINCESSES: LONG ISLAND airs tonight with a new episode called, “Intermenschion” On tonight’s show After Erica repeatedly flakes on the rest of the Princesses, Chanel decides that her drinking is hurting their relationship. Did you watch last week’s premiere episode? We did and we recapped the episode right HERE!

On last week’s show it’s Ashlee’s 30th birthday and all the Princesses are there to help her celebrate Long Island–style — in a club in a strip mall and a scantily-clad crudité server. Later, Chanel got an unexpected and unpleasant visit from her ex-boyfriend who was anything but Prince Charming. Ashlee took Casey, Chanel, and Joey to a weekend away at a Jewish singles camp in Connecticut, but a summer storm threatened to throw their trip off track. Back on Long Island, Amanda and her mom Babs took Erica out to the hottest club on Long Island. With boyfriend Rob waiting at home, Erica wasn’t afraid to show her flirty side.

On tonight’s show Amanda takes Chanel out on the town to cheer her up after an upsetting confrontation with her ex-boyfriend. After Erica repeatedly flakes on the rest of the Princesses, Chanel decides that her drinking is hurting their relationship. She brings it up to the girls and Casey (of all people!) volunteers to help her snap Erica back to reality, but will Erica ever change? Amanda and Joey avoid the drama by busily working on their businesses while Ashlee enjoys a date with an NCB-Nice Christian Boy.

Tonight’s episode is going a great one you won’t want to miss, so be sure to tune in for our live coverage of the show tonight at 9 PM EST!  We are already predicting this will be a hit show.  While you wait for our recap hit the comments and let us know how excited you are about tonight’s episode of Princesses: Long Island.  Also we have a sneak peek video of tonight’s premiere episode below, ENJOY!

Amanda goes to Chanel’s house to invite her to a night out. Amanda believes Channel needs it what with her ex bothering her and her little sister getting married. Channel wonders what about Erica so Amanda calls her up to invite. She only got voicemail but secretly Amanda is glad. She doesn’t want a repeat of the night before.

Channel is having fun on the dance floor. She’s also appreciative of Amanda doing this for her. Although Amanda has another trick up her sleeve. She brings over a guy for Channel’s enjoyment. The night is going good until Channel hears back from Erica about how she’s sick. Channel understand but wish she could have been told earlier.

Erica meets with her boyfriend, Rob. She feels that he overly jealous and needy so she confronts him on this after he brings up his own complaints with their relationship. He thinks they should slow down on their drinking. They’re getting to be too old for it but she doesn’t want to. She feels they’re still young and should have fun. Rob wants to know where they stand but Erica manages to maneuver around the question.

Joey, Amanda, Ashlee, and Casey go over to Channel’s house for breakfast. Channel and Amanda are hungover but everyone tells them they still look good. The ladies begin to question where Erica is. Everyone realizes that Erica has been flaking a lot lately. Channel wants to stage an intervention. She feels that Casey should help also. Joey and Amanda don’t necessarily agree but they don’t voice their worries.

Amanda is at her house going over her designs for her business when Ilton, her best friend comes over. She and Ilton have a business meeting. She make drink cover ups. It’s a fashionable and eco way to no longer use napkins. They’re going over ideas for a party when her mom Babs comes in with snacks. She sees what they’re doing and has her own idea. Baba suggest a sex toy party. Of course Amanda says no.

Joey goes to meet a marketing exec. She has a business and wants to focus on that but the exec seems to want to focus on her personal life. The exec wants her to sexualize the brand but Joey doesn’t want her brand to go there however she doesn’t have a trust fund to fall back on so she pushes on.

Casey and Ashlee go shoe shopping. Their friendship has really taken off. Ashlee was concerned about Erica’s intervention but after speaking to Casey she feels reassured that Erica is going to get the advice she needs.

Joey hangs out with her dad. Her dad allows her to live with him for rent free but he doesn’t pay for anything else. Joey moved back in so she could put her money towards her business but her dad wants her to give up the business and go into working full time. He doesn’t get that she’s building it up from scratch and so she feels that nothing is ever good enough for him. They eventually can’t come to an agreement and Joey ends up in tears.

Casey and Channel head out to Erica’s for the intervention. Casey feels awkward once at the house. Especially when Erica’s mom remembers her. The ladies make their exit to Erica’s room and that’s when things begin. Channel tries to break into intervention mood by mentioning other addictions. That doesn’t work so Channel gets to the point. The intervention isn’t going well and Erica isn’t taking a thing from it. Erica thinks the whole thing is ridiculous.

Later Erica tells her mom what happened. Her mom hears what her daughter is telling her and immediately defends Erica. She all t also tells her to ignore their “advice”. Erica decides to listen to her mom.

Will that be enough?