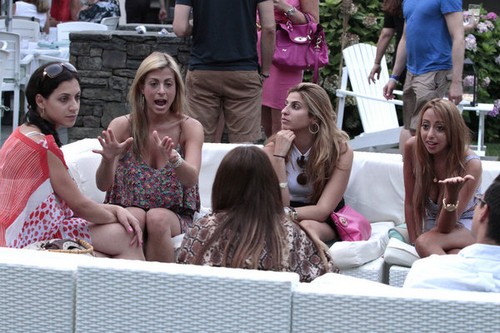 Our favorite new Bravo show this season PRINCESSES: LONG ISLAND airs tonight with a new episode called, “Shabbocalypse Now.”  On tonight’s show Ashlee and Chanel travel into the city and meet new Princess Casey.  Did you watch last week’s premiere episode?  We did and we recapped the episode right HERE!

On last week’s show we met the Princesses, a group of young women from affluent areas of Long Island who live pampered lifestyles in the comfort of their parents’ homes.  Chanel enjoyed Shabbat dinner with her modern Orthodox family, only to be reminded that her marriage clock is ticking.  Ashlee got a mani-pedi with her father and shopped for a dress for her 30th birthday party with Joey, the lone Princess from the South Shore. Amanda enjoyed a romantic date with her older boyfriend, Jeff, and tried to keep her mother from tagging along. Erica hosteda pool party for the girls that turned from posh fun to mosh pit mayhem as the drinks flowed and the season kicked off in dramatic style.

On tonight’s show Ashlee and Chanel travel into the city and meet new Princess Casey, a New York City dweller who is anything but the typical Long Island girl. Joey tries to makes nice with Amanda after the pool party debacle caused by her friend. Casey opens up about her painful past with Erica but tries to put their issues aside for a group trip to the Hamptons. At Chanel’s Shabbat dinner, Casey’s anger boils over, turning a peaceful Shabbat into a Shabbacolypse!

Amanda is out shopping with her mother again. Some retail therapy is needed after last week’s fight. Earlier Joey had texted her because she wanted to talk about the party so she meets up with the duo at the store. Joey is defending herself by saying she knew she wouldn’t be able to stop her friend so she didn’t even try. But she is sorry about ruining Amanda’s night at the party. Amanda forgives her although she’s now weary about Joey’s friendship.

Ashlee is with her parents and Chanel. Her parents absolutely dote on her before the two women leave to go live it up at the club. Unfortunately the club they chose is having a gay night. Oh well, they decide to stay and eventually meet up with Casey, a friend of Chanel’s. Casey is from Long Island but now lives in the city. Ashlee loves Casey however Chanel warns her that Casey and Erica have history. Erica it seems stole Casey’s boyfriend/ first love ten years ago. Ashlee doesn’t think matters anymore until Chanel reminds her that things stick on Long Island.

Erica and Amanda are out on a double date with their boyfriends. The night starts off well. Then Amanda tells the story how she met her boyfriend. Yeah no one else can live up to a guy buying new clothes in order to impress he hadn’t even spoken to.

Casey and Chanel are hanging out together. They briefly touch on the Erica situation. Chanel brought her up because she wants to invite Casey to a house she rented in the Hamptons. Casey doesn’t want to go yet Chanel manages to get her on the bus.

Joey and Erica are together. Joey tells Erica that Casey is going on the trip. Erica admits that she stole Casey’s boyfriend and has never felt bad about it. She wants what she wants. So Joey feels now is the time to tell Erica that she once slept with Joey’s boyfriend. Erica didn’t know it was Joey’s boyfriend much less that she took the guy’s virginity. Still, Joey claims it was high school and she’s over it.

The reason Casey isn’t over it because her father had left her mom for another woman when she was two. There’s a history of feeling abandoned that makes the situation with Erica more painful. Casey decides to try and talk with Erica on their upcoming trip.

Ashlee is anxious about being away from her parents but she does make it onto the bus. A bus decorated with stripper poles that are eventually used by Erica. On their way to the Hamptons, Erica begins drinking. Joey tries to stop but feels that Erica is drinking because she has to face Casey again.

The girls arrive at the house. Except for a minor hiccup involving a stain on Ashlee’s sheets; things are fine. Everyone is dressed for dinner when Casey arrives. She ignore Erica which only serves to infuriate Erica.

Everyone is sitting down to Shabbat dinner. Erica goes off on tangent when Casey asks her to remain quiet because she feels Erica is just saying bs. Erica storms off from the table. Outside, she calls her boyfriend to vent. Inside, Casey admits she was wrong but also states she hates Erica. Chanel tries to salvage the night but can she?