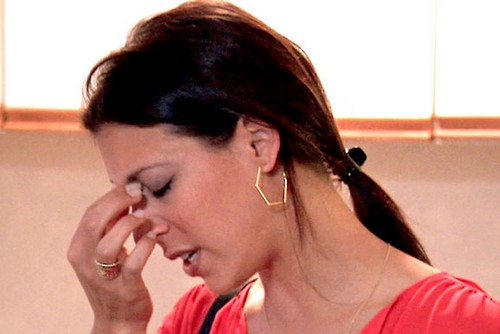 On last week’s show after the Drink Hanky party fiasco, Chanel went to see her rabbi to get back on track. She survived the challenge of maid-of-honor dress shopping and even walked away with a date. Erica’s relationship with Rob took a giant and unexpected step forward when they went shopping for a home together. Joey and Ashlee’s friction turned to feud when Joey discovered that Ashlee has been talking behind her back to the other girls. Joey confronted Ashlee about her behavior and the situation went from bad to worse.

On tonight’s show Joey’s father gives her a 90-day deadline to move out of the house, and when Joey goes apartment shopping with Amanda, she realizes just how painful that’s going to be. Meanwhile, Chanel is going through a shakeup of her own — the loss of her baby sister to her husband. Chanel’s sister’s wedding has finally arrived, and it’s a classic Great Neck modern orthodox Jewish affair.

Summer is coming to an end for the princesses of Long Island. Chanels’ sister’s wedding is around the corner and here’s hoping she survives it.
Ashlee’s parents are away for a while. Unused to an empty house, Ashlee invites her friends over for a sleepover. The girls are excited. It’s like their kids again. One exception they get to drink this time. Before they can get into party mood however Ashlee asks Amanda about what she’s been saying to Joey. Some she said business and Amanda admitted to Joey that Ashlee spoke about her. Ashlee hugs it out with Amanda but she’s going to remember Amanda is more high school than she thought.

They’re playing “Never have I Ever” when it comes up that Ashlee might be a virgin. She plays it cool so no one really knows for sure but Amanda feels that maybe Ashlee needs to get some to loosen her up.

Joey’s living situation is getting difficult. Her dad had remarried so she’s living with him and his new family but he’s been on her about moving out. He feels that her company should be on a backburner. He’s giving her 90 days to support herself fully. She agrees to his ultimatum but is worried about launching her company within the next 3 months.

Erica is having her boyfriend over at her parents’ place. Her parents don’t know that she’s been looking at places with Rob and that might have to do with her not being sure about it yet they’re going to tell her parents over lunch. Her dad is concern about this news. He wants Erica to be engaged first. So he asks when marriage would be on the table and Rob throws out September which completely freaks Erica out.

Chanel is the maid of honor at her sister’s wedding and Casey is helping her with her speech. Casey wants Chanel to focus on her sister and not get worried about the 400 plus wedding guests.

Amanda is with her man when they set up what might be the perfect match for Ashlee. The double date is going well. Ashlee is able to see real potential in Marco. He’s a little bit older but he’s making her laugh and doing his best to woo her.

They continue to party by going to a club Marco recommends. What the group doesn’t expect to be in a crowd of the over 50. The group are still enjoying themselves when Marcos became overly aggressive. He follows that up with dancing with every woman he could get his hands on. Ashlee decided to make a quick exit after that.

It’s the night before the wedding and Chanel is still worried about her speech. She’s also getting teary about giving her sister away. Her sister is leaving the house while she’s staying. It wouldn’t be so bad if her mom didn’t try to add “Jewish guilt” at every moment she can.

Joey is looking at apartments with Amanda. It’s hard to find out that even the smallest apartment is over a grand. She invested everything into her company but she has to move out. Amanda is looking at the apartments and feeling like all of it represents a horror movie. She suggests Joey calls her dad to talk about the situation. He feels like it’s a song and dance and quickly dismisses her. Amanda feels so bad for Joey after hearing how her dad speaks to her. They have to find a way to get her out of his house.

The wedding has finally arrived. Its Chanel’s time to tell her speech. At first it’s difficult getting everyone’s attention but her sister got to hear her speech. Chanel is going to think about having fun instead of getting married despite what her mom may think. Who knows maybe the nest guy is the one but as for now, Chanel isn’t going to worry herself out.