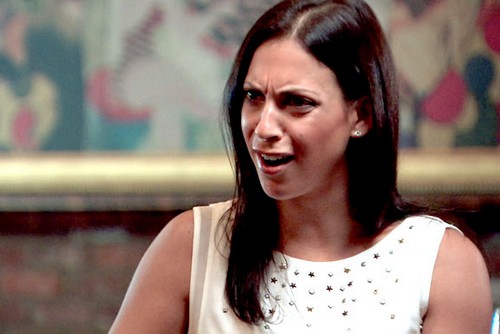 Our favorite new Bravo show this season PRINCESSES: LONG ISLAND airs tonight with a new episode called, “Who Are You, the Pope?” on tonight’s show Joey and Ashlee’s friction turns to feud. Did you watch last week’s premiere episode? We did and we recapped the episode right HERE!

On last week’s show Casey, Ashlee, and Joey try to improve the odds of finding a nice Jewish boy by going speed dating, but their already tenuous friendship takes a turn for the worse as friction starts between Ashlee and Joey. Meanwhile Amanda is throwing a white party to help launch the Drink Hanky. The pressure on Chanel to get married intensifies when she goes wedding dress shopping with her little sister, then explodes at the Drink Hanky party when she ends up in a brawl with another partygoer.

On tonight’s show after the Drink Hanky party fiasco, Chanel goes to see her rabbi to get back on track. She survives the challenge of maid-of-honor dress shopping and even walks away with a date. Erica’s relationship with Rob takes a giant and unexpected step forward when they go shopping for a home together. Joey and Ashlee’s friction turns to feud when Joey discovers that Ashlee has been talking behind her back to the other girls. Joey confronts Ashlee about her behavior and the situation goes from bad to worse.

The show begins with Joey, Amanda and Erica out for a little hike/jog and of course some girl chat. The talk turns to how Chanel freaked out at Amanda’s party. The it turns to how Ashlee and Joey got into at the party as well, Ashlee called Joey a bad person. Then apparently Ashlee warned Erica about Joey, saying Joey was not a good friend. Joey starts to cry as she realize Ashlee is totally bad mouthing her and being vindictive. It is decided that Joey is going to text Ashlee so they can talks.

Chanel goes to meet with her Rabbi to have a talk. Rabbi Cohen is her close family friend. Chanel relays what happened at the party and shares she is bottling up a lot of anger. She doesn’t feel like she can be herself, she feels bad all the time. The Rabbi tells her that when people bring out the worst in you to show restraint. Chanel goes on to talk about all the pressure in life, her younger sister getting married and the pressure against Chanel to get married. Rabbi Cohen convinces her that she is special and should be inspired by who she is. Chanel cries as she listens to the Rabbi cheer her up. He talks about the Jewish hardships and she realize that finding a guy should be easy compared to the Jewish past, no joke she said that.

Erica and Rob go house hunting. Despite her reservations she doesn’t want to end up like her single friends, who were all fighting at the party. Once the relator mentions kids Erica shares she wants a kids but basically hates everything about being pregnant, despite never being pregnant. After seeing the house Erica and Rob talk about being ready to move in. Erica is freaking out about all the pressure. He just wants to move forward.

Amanda and Jeff head to the Kosher Deli to have lunch with Jeff’s parents. Amanda is very comfortable with his parents. As they look at the family heirloom ring on Jeff’s mom’s finger the talk turns to the kind of ring Amanda wants and how she knows Jeff is the one. Amanda wants to grow old with Jeff, his parents clearly approve of her and it looks like an engagement could be looming.

Chanel and her family get together so she could try on maid of honor dresses and it turns into her sister Ashely trying to set her up with the dress shop owner. He is also the best man in Ashley’s wedding and owns his own dress shop. Nati arrives and Chanel is impressed he came all the way from Brooklyn so she could have her own fashion show. The dresses are gorgeous as she is trying on dresses her sisters tells Nati best man and maid of honor have to go on a date. He asks her out and she says yes.

Ashlee and her date talk about Casey, who is coming over. Ashlee goes to try and make frozen vegetables that cannot be steamed, she is confused by having to microwave the broccoli. The girl is so not domesticated. Casey arrives to have dinner with Ashlee and her parents. Ashlee talks about speed dating she went to with Joey and the inappropriate questions Joey was asking. Ashlee rehashes the party for her parents and tells how Joey is mean to everyone. Casey agrees that Joey goes after Ashlee a lot.

Erica and Amanda go to the beach to get their tan on and drink beer. They dish about how they are so tan and have big boobs. They also talk about Babs, Amanda’s mom who needs to let her fly the coop. Amanda’s mom is single so Amanda thinks her mom is jealous. Erica talks about her relationship verses Amanda’s. The chit chat turns to Erica and Rob living together. Amanda tells her not to rush. Amanda thinks Erica and Rob are jumping the gun.

Chanel and her sister Ashley go to Brooklyn for her date in a very Jewish neighborhood. He takes her to dinner and asks how she feels about her sister getting married since she was older. Chanel opens up about the pressure he says it is not about age but connections. He is Israeli and she has never dated an Israeli guy before. It gets weird when he says she could cook for him forever, she reveals she does not cook. Then he shares he wants a woman who cooks and cleans, etc that is clearly not her. He wants to spend more time with her but his what he thinks of woman holding down the household chores has put her off. He gets worse when he calls her moody.

Amanda and Babs have a chat about Amanda and Jeff. She wants her mom to be as supportive of her relationship as Jeff’s parents are. So Amanda shares that she really really really wants to marry Jeff. Babs reminds her they have only been dating six months and wants them to wait. Amanda is put off as her mom is not on board yet. Babs thinks that it takes a good year to know someone one. Amanda defends her relationship to her mother and a little argument erupts. Babs is worries that Jeff is 11 years older than her. Amanda calls her mom jealous and things go from bad to worse and Babs defends herself and thinks they should know each other a year.

Ashlee and Joey meet for their talk, which of course includes drinks. They cut right to the chase. Joey reveals she was very hurt by being called a bad person and wants to know why Ashlee thinks that. Ashlee basically says she was not speaking from a place where it came out of the blue and does believe that. She thinks the behavior towards her has not been nice but also mean.

Joey asks for example. Ashlee says she picks on her and Joey does not see it. The chit chat turns ugly and gets heated as they fight about who is right and who is wrong. Joey doesn’t think she is mean but Ashlee does feel like Joey is not nice. Erica and Amanda get brought up as Joey says she knows that Ashlee told them to not trust Joey. The claws come out when Joey calls Ashlee funny looking. It is seriously worse than a high-school fight. Ashlee freaks when Joey calls her funny looking, pays the check and leaves. Joey calls Amanda and rehashes the funny looking comment.

Ashlee calls her dad and rehashes things with him, as she is standing outside the restaurant. Soon Joey comes but Ashlee walks away. Joey calls Amanda crying looking for reassurance she is a good person. Amanda tells her she is not a bad person at all.