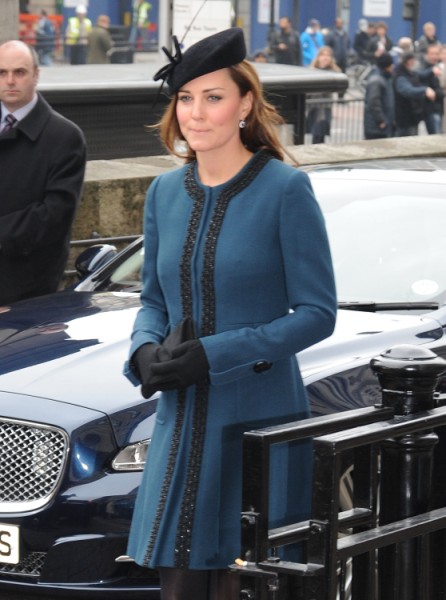 I’ve got this sneaking suspicion that Kate Middleton’s going to go all Keyser Söze on us soon. Two days in a row of working! Three events in six days! What is the world coming to? It’s almost too much. I haven’t seen her this much since the Olympics. I’m not complaining but what’s the deal? There’s always a hook. Could Queen Elizabeth be none too pleased with all the lazy Katie comments lately? Is that why she hauled Kate and Prince Philip to the 150th anniversary celebrations of the London underground? It makes you think. You know Kate has only done two other public events with the Queen and this was the Queen’s first public outing since getting out of the hospital and canceling a few events. So it was a major deal. Was the Queen making a statement?

I’d like to think so. Perhaps she was saying “Lay off my great-granddaughter. She’s doing a bang up job!” Or she could have been saying, “See Kate Middleton working? Ya, she’s going to be doing a lot of this from now on.” The second one was probably more on the money. The intense morning sickness is over and so are the beach and skiing vacations for the time being. The PR machine is probably just stacking Kate’s workload while it can. This won’t last long. She’ll probably keep this up for another month or so and then go into hibernation with one or two appearances after that before the baby is born. These pics of her and the Queen will be heavily recycled reminders she worked while pregnant when she’s holed up in Kensington talking to Pippa on the phone and shopping online during her last few months of her pregnancy.

But let’s get to the important part – the fashion. Kate looked amazing yesterday at the child bereavement charity event with Prince William. I loved everything she had going on there. It was so fresh and clean and the Topshop white coat just looked so modern. I’m not feeling it so much today. She wore a jewel-toned Marlene Birger coat to the Baker St. Underground. Kate Middleton looked respectable enough, I guess, but she aged 20 years over night. You can’t out flash the Queen so I get the muted ensemble but it’s just blah to me. I’m liking the shorter hem lines though. She’s got great legs so why not?

What do you think of the Queen Elizabeth/Kate Middleton partnership today? Was Liz giving her support or sending a message that Lazy Katie is lazy no longer?