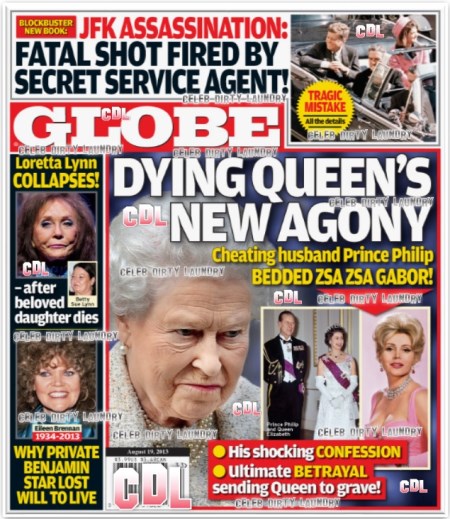 The last several months for the royal family have been spent focusing on Kate Middleton and Prince William and their impending arrival of the royal heir. There has been a hint of Prince Harry’s antics here and there and of course Camilla Parker-Bowles drunken rages continue to spice things up, but mostly the focus was on the royal heir. Now that Prince George Alexander Louis has arrived it’s business as usual for almost everyone.

Queen Elizabeth met her great-grandson and then left to spent her annual holiday in Scotland but according to the Aug. 19th print edition of GLOBE that trip is not exactly drama free. Instead the Queen has learned about her husband, Prince Philip’s affair with Hollywood beauty, Zsa Zsa Gabor many moons ago. Just because the dalliance happened decades ago, don’t expect it to be any easier for the Queen to take and the depression from this piece of information is compounding her ongoing medical issues, leaving Elizabeth to not care about very much at all.

GLOBE has spent years reporting on the dirty deeds of the royal men and we all know that Prince Charles kept Camilla on the side for thirty years before deciding to marry her. I guess this nugget proves that the apple doesn’t fall far from the tree and we can see who Charles inherited his shady side from. I’m sure the Queen doesn’t appreciate the embarrassment of this scandal and it’s certainly something that she shouldn’t have to deal with this late in her life.

Do you believe what the government has spoon fed us in terms of JFK’s assassination? Well there is a new book hitting the shelves that is taking aim at the supposed facts and insisting that he was in actuality killed by his own secret service detail. GLOBE has an exclusive on this explosive new book and gets enough info to make us all need to rethink the story we have always been told.

Eileen Brennan, best known for her role in Private Benjamin died last week and the Aug. 19th print edition of GLOBE is one of the only publications that seems to have even noticed.  Brennan was battling a serious illness and you can get the scoop on why she willingly gave up her fight for life.

Leave it to GLOBE to tear the cover of the JFK assassination coverup! Not only that, but as usual GLOBE is bringing the hottest celeb gossip, soap news and Hollywood star info to the forefront in it’s latest issue. No other publication has the inside sources and temerity to report the breaking Royal scandal of the Queen’s shame at the end of her life. Grab yourself a copy today and enjoy GLOBE’s top-level reporting.  That’s what I’ll be doing as soon as I get done with this post!