Rachel McAdams & Kit Harington Spotted Together In Toronto – Getting Romantic? 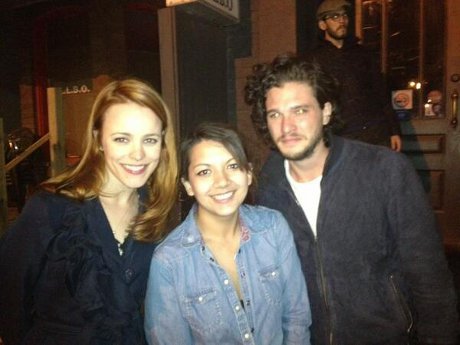 Rachel McAdams and Jon Snow a.k.a. Kit Harington were spotted together in Toronto, according to a fan who saw them together and took a picture with them [via Lainey Gossip]. According to the report, Rachel and Kit were out with several friends for dinner and drinks. That doesn’t necessarily mean anything, but since this is Hollywood, people are always jumping to conclusions.

Now, Rachel McAdams is single – she was previously with Michael Sheen for a while, but the two broke up, reportedly because they both had different ideas about where their relationship was going. Of course, tabloids have since been doing their best to hook up Rachel with anyone that she’s even spotted with. However, Kit Harington, while he never publicly commented on his relationship, was reported to be dating his Game of Thrones co-star and love interest, Rose Leslie [who plays Ygritte].

Again, there are no confirmations on the status of Kit and Rose’s relationship, especially since they haven’t been spotted together for a while. That being said, that doesn’t mean anything and they could just be staying on the down-low. Kit is filming in Toronto right now [the period action film ‘Pompeii] and Rachel is said to live in Toronto, and since film people network and party together, it could have just been that – a dinner between friends and people in the industry.

But wouldn’t they make an adorable couple? Rachel and Kit have an 8 year age gap between them, but what does that matter in matters of love, especially in Hollywood? The rising British star and Hollywood’s sweetheart – this is a couple that everyone could root for. Of course, that would mean that Kit and Rose would have to break up, and that might make things awkward on the set of Game of Thrones [spoiler alert: Kit and Rose’s characters hook up on the show].

Anyway, this is all speculation at this point, but fans are already starting to gossip so it’s only a matter of time before the tabloids start to pick it up too. The only question is, is it true [or even possible] or is it just wishful thinking on all our parts? Rachel McAdams & Kit Harington dating? Let us know what you think in the comments.