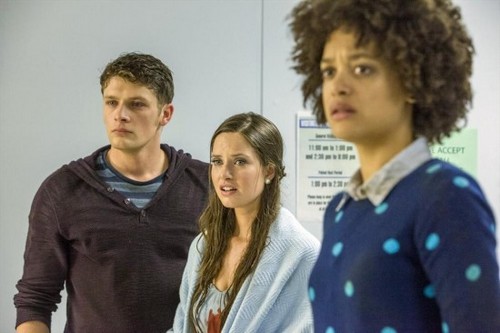 Tonight on the ABC Family the new series RAVENSWOOD continues with a new episode called “Death and the Maiden.” Did you watch last week’s premiere episode?  We did and we recapped it for you, right here.

On last week’s show, after opting to stay in Ravenswood to help out new pal Miranda, Caleb began to rethink his decision, especially after he met Miranda’s cold and unwelcoming uncle Raymond (Steven Cabral). Caleb also had some unpleasant interactions with local resident Luke (Brett Dier), who was struggling to deal with a recent family tragedy and its ensuing scandal, which had also swept up his twin sister Olivia (Merritt Patterson).

On tonight’s show, Caleb struggles in the aftermath of what happened at the Ravenswood Homecoming Parade.  A shocking discovery is made by Remy. Meanwhile, Luke and Olivia face facts about their parents; Miranda struggles to adjust to changes in her life; Luke doesn’t hide his dislike of Caleb; and Caleb encounters someone unexpected.

We hope you stop by for this new show!  If you are fans of Pretty Little Liars I am sure you will enjoy it.  Make sure to come back here later tonight at 8 PM EST for your LIVE recap. What are you most looking forward to this season?

The show begins with an ambulance rushing to the hospital — after the horrible crash into the river. Caleb, Luke, Miranda, Remy, and Olivia are all in the ER. Remy says that Miranda grabbed the wheel. Caleb says that she must’ve seen something in the road, but Remy says there was nothing in the road. Meanwhile, Miranda flatlines. She’s dead.

Remy’s parents arrive. Once Remy’s father sees Luke, he tells him that he doesn’t want him hanging around his daughter anymore. Olivia and Luke’s mother arrives, and she’s not polite to the Chief of Police — because she’s being accused of murder. Remy continues to be questioned, etc. because she was the one behind the wheel at the time of the crash.

Caleb heads down to the morgue. He’s greeted by the medical examiner, who offers him half of his sandwich. He leaves to go get the sandwich. While he’s away, Caleb hears a funny noise come from Miranda’s cabinet where her body’s being stored. A few other weird things happen and, just after the strange occurrences, Miranda’s uncle comes walking in. He looks surprised to see Caleb sitting there.

Raymond takes Miranda’s body away. Caleb says that they should tell her foster family about what happened, but Raymond says that her foster family has no interest in her, as he was already trying to locate them to tell them where she’s been the past few days. Grunwald encourages Caleb to come back to the house with her and Raymond — she recognizes that he has no place to go.

Caleb has a dream; he sees Miranda. She asks him what he did with her bag, because he’s going to need the things inside it. He wakes up, shaken, and Grunwald is there. She wonders if he’s contacted Hannah yet. He says no. Grunwald says that they were here looking for Allison, but Allison is long gone by now. Caleb asks Grunwald “what is it exactly that you do around here?” and she responds with, “I give help when help is required.”

Before Grunwald leaves, Caleb asks where Raymond is. Grunwald says that he’s preparing her body, which “is nothing more than a shell now . . . . Her soul is elsewhere now.” Caleb admits that he doesn’t “believe in any of that life after death crap.” Grunwald counters with, “Fortunately, the existence of the soul isn’t dependent on your limited experience.”

Remy is on her computer and she researches more about this “curse” she thinks exists — this idea of the “five” and the deaths that happen to surround that number. Luke throws a pebble at her window and Remy comes down to see him.

Back in Caleb’s room, Walt Whitman’s Leaves of Grass mysteriously falls off the counter. He reads a highlighted passage and, as he does, things around him begin to shake. The mirror explodes.

At the school, Caleb finds Remy, and he asks if he can get into her car — because he needs Miranda’s bag. She says that her car is at the junkyard and, if they want to go get the bag, they’ll have to sneak in after her shift at the local paper.

Caleb is reading in the coffee shop when the Chief of Police comes by to fill up his coffee cup. He begins interrogating him and says, “Here’s what I think. I think there’s a lot you don’t know about your friend.” He’s talking about Miranda.

Raymond asks if Caleb is still here and asks if he’ll want to stay. Grunwald says he probably will. Before Grunwald leaves, she asks Raymond how many bodies he expected to find when he went to the hospital.

Caleb and Remy sneak into the junkyard.

Tess helps Olivia take her homecoming photo, but Olivia says she’s tired of smiling and being brave for her whole family. She says, “How am I supposed to pretend my father wasn’t murdered?”

Back in the junkyard, Remy says that she thinks they all should’ve died in the accident, but perhaps the cosmos “screwed up” and somehow the four of them survived. Remy and Caleb find Remy’s car. Remy goes into her car through the window, but as she does the radio turns on and the window begins rolling up — she gets stuck. The junkyard guard dog also gets out and begins running for the screams.

Caleb comes to Remy’s aid and pulls her out of the window. They manage to get the bag. As they run out of the junkyard, Luke comes to save them.

Caleb sneaks into Raymond’s workplace. Raymond comes in and says he shouldn’t be here in this “place of business.” Raymond says that he’s welcome to stay in the guest room until the service, which will be in a couple of days. Before Caleb leaves, he says, “I’m sorry for your loss.”

Remy is sleeping and, next thing we see, she’s standing in the middle of the road. A car stops just in time before hitting her and her parents run out of the house. Remy was sleepwalking again.

Olivia comes home and is greeted by her mother, who says, “You’re beautiful; I wish your father could see you.” Olivia comes right out with it: “Were you and dad going to get a divorce?” Her mom says, “I’m not going to lie and say we weren’t having problems but–” Olivia then asks if there was someone else and her mother gets really mad.

Caleb is in his room and he reads outloud the letter Miranda’s mother gave her. AND THEN MIRANDA RETURNS. She says that she’s dead and that she’s a ghost. Caleb wonders, “If you’re dead, then why are you still here.” Miranda’s not sure how she’s still here, but she suspects her uncle’s house possesses some kind of power, as if things can go back and forth.

Miranda asks if she can stay in this house with him because she’s afraid to leave and, even when she tries to leave, she feels like others things are out there.

What did you think of tonight’s episode? Let us know in the comments section below!