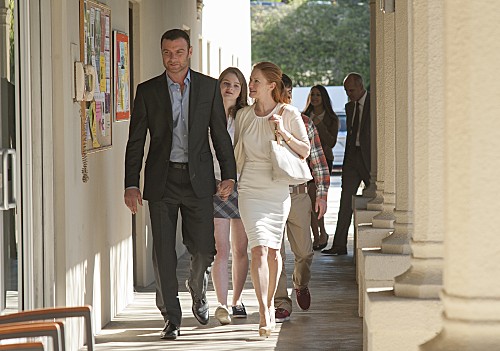 Tonight on Showtime their new drama RAY DONOVAN continues with a new episode called, “Black Cadillac.” On tonight’s show Terry starts a romance with his nurse, Frances. Ray finds out that the murder investigation against Mickey has been shut down. Did you watch last week’s series premiere episode? If you missed it you can read our full and detailed recap, right here.

On last week’s episode Mickey (Jon Voight) spends time with Bunchy (Dash Mihok) and Terry (Eddie Marsan), insinuating himself back into their lives. Ray “buys” a talented hip-hop artist for his rapper neighbor. Ray’s mentor, Ezra Goldman (Elliott Gould), holds a fundraiser in honor of his late wife, but he’s haunted by the sins of his past. Meanwhile, Mickey is approached by an FBI agent with a Hollywood obsession.

Ray, Abby, and the kids visit Bel Air Academy, hoping Bridget (Kerris Dorsey) will get into the prestigious school, but the day is interrupted when Ray has to take care of a case at a Beverly Hills hotel. Mickey, Bunchy and Daryll (Pooch Hall) drive out to Palm Springs to visit Mickey’s ex-girlfriend, Claudette (Sheryl Lee Ralph). Terry (Eddie Marsan) starts a romance with his nurse, Frances (Brooke Smith). Ray finds out that the murder investigation against Mickey has been shut down.

Tonight’s series premiere looks like it going to be great and you won’t want to miss it. So be sure to tune in for our live coverage of Showtimes’s Ray Donovan episode 4 — tonight at 10PM EST! While you wait for our recap check out the sneak peek video below of tonight’s episode!

The show begins with Ray looking out a window where it is snowing and seeing a vision of his dad having sex with his wife. It was clearly a dream, he wakes up startled but in bed with his sleeping wife. After the dream he looks outside to see Marvin riding around in his golf cart.

Back in Boston the witness picks Mickey out of a line-up. Ray is informed his father will be picked up today. He calls Avi to tell him to have eyes on Mickey all day.

Mickey and Daryl wake up Bunchy to tell him they are all going to Palm Springs to see Claudette.

At Ray’s house Bridget informs Ray there it is family at the private school Abbey wants the kids to go to. Ray tries to back out causing a fight with him and Abbey. The Donovan family heads to Bel Air Academy for family day.

On the way to Palm Springs Mickey and the boys talk about great kids coming from great sex. Daryl plays Mickey one of his songs and Mickey calls it crap. Bunchy and Darly get into it over Bunch rolling the window up and down. There is no love lost between those two.

Marvin shows up at the Donovan house as they get ready to leave asking Ray if he bought him. In the car Abbey and this kids talk about Marvin as they appear to having a family bonding moment.

Terry goes to the gym only to be hounding by Pot about being broke. However Pot does give Terry cooking advice as he is making dinner for the doctor.

In Palm Springs Mickey gets a call from the FBI agent Van who is not thrilled Mickey left town. Mickey tells him to basically go screw himself. Daryl lets Bunch and Mickey know his step-dad is a jerk. Alan, the step–dad answers the door, introductions are made Mickey thanks Alan for taking care of Daryl. Soon Claudette comes out and hugs Mickey.

Abbey is very nervous at Bel Air Academy and gets more nervous when the run into Stu, who orders his son to show Connor around. Stu is still messing with Ashley, who has gone crazy and now he needs Ray to take care of it for him. Ray tells him he is not working today. During the meeting at Bel-Air Ray gets a call from Avi, relaying the Mickey update. Ray instructs Avi to get Mickey back to L.A. so the warrant can be served.

Alan, Mickey, Claudette and the boys make small talk and drink. Alan gets under Mickey’s skin.

While on the tour of the school Connor reveals that Tommy Wheeler is one of his best friends. He shows the kids text from Tommy. They tell him to call him so he does but Stu’s son calls Tommy a total perv who likes guys. That ends the good tour for Connor.
Bridget makes friends with some very snobby rich girls.

At the gym Pot makes Terry some sauce from scratch that he can uses for his dinner. He tells Terry the recipe will get him laid.

Bunch and Daryl continue to fight after Bunchy pushes him in the pool. The two get into a fist fight but then make-up as Daryl loosens up a little.

Mickey gives Alan a good movie idea, basically it is the story of his life. Mickey is stunned when Alan asks if he is there for the money. Mickey shares it isn’t the money it is after as he and Claudette sit to have a talk about Ray’s family.

Abbey and Ray’s day at Bel-Air Academy goes a little awry when a drunk guy tries to start crap with Ray about his job. Ray gets a call and leaves Abbey alone. Stu comes up to apologize for saying Ray slept with his girlfriend. Abbey accepts his apology. Stu says he will put in a good word at the school about Bridget and Connor.

As Lena is doing surveillance on a couple one of the microphones are found. Ray goes to the hotel to clear out all the microphones. The woman attacks Ray, Lena fends her off as Ray gets out of there. Abbey is annoyed that Ray left.

Claudette has kept Mickey’s car all these years. The two dance as they take a trip down memory lane. She said he saved her life, he stole half a million dollars for her. They kiss but she pulls away making it clear things have changed. She is with Alan.

Connor continues to have a tough time during the family day as Stu’s son continues to rag on him. Connor hits him in the back of the head with a rock.

Ray runs into the drunk again in the bathroom. He has a beef with Ezra not Ray and says he was just running his mouth. Ray leaves and finds Bridget playing the guitar. She tells him that she wants to go to the school. When Bridget asks about his face he shuts her down.

Connor and Jamie have it out with their families as Jamie tells on Connor. Once Connor admits what he did he calls Jaime a jerk. Stu gets pissed as the Donovan family walks away. Abbey is pissed.

Mickey, Daryl and Bunchy have a nice dinner and at dinner learn Bunchy stole a really nice bottle of wine from Alan. The men enjoy their meal and bond as a family. When Mickey goes to the bathroom he is discovers Val is there. Val reminds him he needs to cooperate. The FBI agents also reminds him he knows Mickey killed the priest and that he can take care of it but only if Mickey works with him. Val wants Ezra, Lee and Ray.

The drive home is tense between Ray, Abbey and the kids. Connor asks Ray about Tommy Wheeler, who is silent.

Terry and Francis, the doc, dinner is interrupted by Potato Pie, who joins them for dinner. She goes with the flow and they have a nice time.

At the house things don’t get any better between Abbey and Ray, especially when he gets a phone call that the case against Mickey has been shut down. He calls Avi to let him know something is up and tells Avi to get out of there. Ray watches his family from outside.