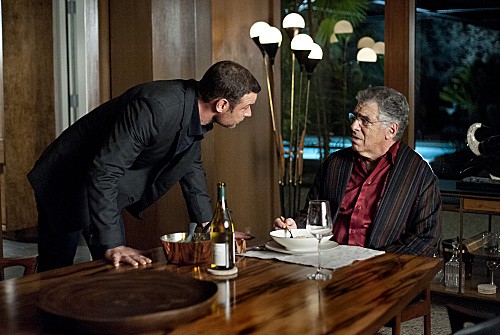 Tonight on Showtime their new drama RAY DONOVAN continues with a new episode called, “The Golem.” On tonight’s show Ray and Avi learn some very unsettling news. Did you watch last week’s series premiere episode? If you missed it you can read our full and detailed recap, right here.

On last week’s episode Ray, Abby, and the kids visited Bel Air Academy, hoping Bridget (Kerris Dorsey) would get into the prestigious school, but the day was interrupted when Ray had to take care of a case at a Beverly Hills hotel. Mickey, Bunchy and Daryll (Pooch Hall) drove out to Palm Springs to visit Mickey’s ex-girlfriend, Claudette (Sheryl Lee Ralph). Terry (Eddie Marsan) started a romance with his nurse, Frances (Brooke Smith). Ray found out that the murder investigation against Mickey had been shut down.

On tonight’s show Ezra has an accident. Ray and Avi learn some very unsettling news.  Ray just does not understand why the murder investigation against Mickey was dropped and how he got out of prison five years early.  Ray is trying to find out what is up with that.   Mickey is out to intimidated Ezra Goodman and it looks like it is working when he asks Ezra what if feels like to send an innocent man to prison.  Ezra is frightened!

Tonight’s episode 5 looks like it going to be great and you won’t want to miss it. So be sure to tune in for our live coverage of Showtimes’s Ray Donovan episode 5 — tonight at 10PM EST! While you wait for our recap check out the sneak peek video below of tonight’s episode!

The show begins with Ezra driving on a dark road. When he looks down for a minute and hits someone crossing the street.

Avi and Ray talk about what went wrong with plan to send Mickey back to jail. Avi shows him pictures of FBI agent Mickey is working with. Lee calls Ray yelling that Ezra has not shown up for a meeting, He orders Ray to get into his office.

Back at the Donovan house Abbey and the kids have breakfast. Connor is still in deep trouble for his actions ad Bel-Air Academy. Bridget has words with her brother about what he did. Marvin shows up to talk to Bridget who ushers him out.

Terry and his doctor lady friend have sex but the topic of his ex-wife comes up because of his tattoo. The doc gets dressed to leave as Terry asks her to stay. She remarks she has a job to get to, he says he has a job too. He asks to see her later, she replies maybe.

Mickey and Bunchy go to the bank deposit his check from the settlement. The teller questions the check and gets her manager. Finally she agrees to deposit it.

Ray tries to get ahold of Ezra as he does Ray loads a gun. He is worried something is going down.

As Mickey and Bunchy leave the bank, Mickey ditches him to have a meeting with the FBI agent. Bunchy’s feelings are hurt. Avi follows Mickey.

Connor calls Ray to complain about being punished for punching the kid at the school. Ray tells him he is punished but the call is cut short when Ray hears a knock on the apartment door. He carefully opens it to find Ashley at his door. She wants him to have sex. As he is trying to avoid her he gets the call about Ezra’s call accident. During this time Ashley handcuffs herself to a rack in his bathroom. She flushes the key down the toilet. Ashley begins to scream as Ray leaves, he turns up the radio and leaves.

At the hospital Ezra is going crazy as they try to give him a cat scan. The sound of Ray’s voice soothes him. Once that is done Ezra explains to Ray that he hit someone. He tells him he dragged the body to the car and put the body in it. Ray questions him for more details but Ezra tells him to calm down and get a massage. An upset ray leaves. He calls Lena and tells her to look for the car. He then goes to see Lee, who calls Ezra a liability. Lee then goes off about Ray’s son.

Ashley goes through Ray’s things in the bathroom then decides to shave her legs. She cuts herself while shaving and write on the mirror with the blood.

Abbey has coffee with a friend from yoga who is a life coach. She probes Abbey about her life claiming she has seen her crying in glass. The friend starts to asks some serious questions about Ray and Abbey’s marriage, which upsets Abbey and she leaves.

Ezra is released from the hospital but there is clearly something wrong with him. Mickey shows up at Ezra’s house to have a talk. Ezra comments on how Mickey has been tormenting him. Mickey asks Ezra how it feels to send an innocent man away, Ezra says he feels terrible and it has haunted him. He recounts for Mickey why they did it. Mickey asks him to tell him one true thing. Ezra remarks “We All Die”. Mickey shares that Ezra was right once he took Sully’s money he was a dead man so Ezra was right about that. He reveals he took the money for Claudette.

Ray has to sit through a heated divorce mediation. When alone with the wife Ray makes it clear that the amount of money she is fighting for is not worth the pain he can cause. He shares with the woman that her husband knows she is having an affair and that she needs to accept the offer. He scares her and she agrees to the settlement.

Bridget and Connor are left home alone so Bridget calls Marvin to go out for pizza.

Terry calls Francis at work only to find out she is not working despite telling him she was working that day. He calls her cell she tells him she got off work early. Terry wants her to come over but she says no and tells him he can’t come to her house.

Mickey and Ezra continue to talk. Mickey tells him a story about being in prison and going on the straight and narrow. Ezra is confused as to what Mickey wants and at one point he doesn’t even recognize him. He calls him the Gola getting very upset. Mickey leaves as Deb takes Ezra way. At the impound lot it is discovers that what Ezra thought was a body was actually a log.

After her talk with the life coach Abbey heads out for a drive listening to the song “The Right Thing To Do”, which also happens to be playing in Ray’s car and his apartment. Ashley sings to it has the apartment.

Ray heads to Compton to find Marvin Gaye’s mother, who has yet to sign over her parental rights. When he arrives there the door is opened and he finds her shot to death. While there he gets a call from Avi who has the FBI agent’s address. They agree to meet there. Before he leaves he finds the paper work signed.

Marvin Gaye gets high while hanging out with Bridget and Connor. He serves Connor liquor. Bridget and Marvin dance on the table together as Connor continues to get drunk. Lena called Ray to tell him Abbey is there at the office.. Ray sends Lena to deal with Ashley.

Mickey and FBI man meet and it is revealed that Mickey was wired during his talk with Ezra. However the only usable evidence he got was that Sean Walker really killed the guy not Mickey.

As Ray and Avi are searching the FBI agent’s house they find the wall of pictures.

Abbey looks through Ray’s things at his office. She finds a key.

Bridget asks Marvin about her dad buying him. He gives her the lowdown on how things went down. Connor goes through Ray’s closet.

Lena gets Ashley as out of the apartment but Ashley is pissed when she find out Lena lied to her. The women get into a fight and Lena smacks her.

Terry goes to Francis house only to find out she has a husband and son.

Abbey finds the key to Ray’s place in the city and goes to look around. While there she finds the handcuffs and the writing in blood on the mirror. Meanwhile back at he house something is seriously wrong with Connor who is on the floor clutching his stomach but Bridget is too busy making out with Marvin Gaye to notice.

At the gym Mickey and Bunchy celebrate Bunchy buying a house. Rau gets drunk at a bar then goes to have sex with Ashley. He heads back to the apartment instead of going home. He breaks down crying as Abbey walks in and asks who he is.