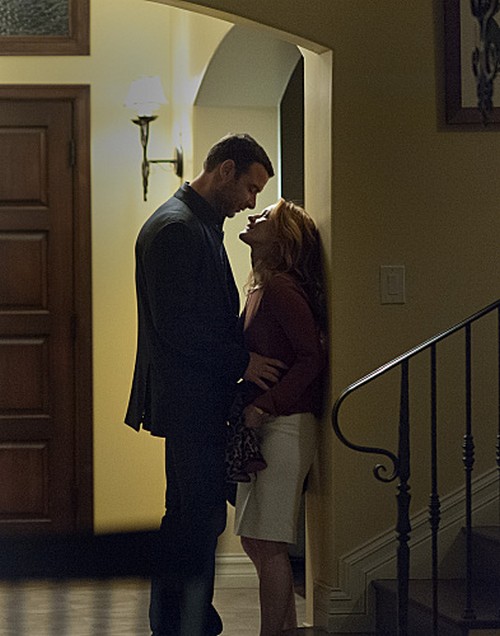 Tonight on Showtime their new drama RAY DONOVAN continues with a new episode called, “New Birthday.” On tonight’s show Ray flies to Boston to search for Sully (guest star James Woods). Did you watch last week’s series fabulous episode? If you missed it you can read our full and detailed recap, right here.

On last week’s episode Ray tried to shut down Van Miller’s investigation. Ezra wandered off.  Ray also settled the score with his estranged father Mickey, after learning that he put Ray’s children in danger.  Meanwhile a housewarming party to celebrate Bunchy’s new house got complete out of control and obviously Mickey was at the root of it.

On tonight’s show Ray is heading to Boston to see Sully, problem is Sully does not want to see Ray.  Ray is not leaving Boston until he sees Sully, he does not care how many people try to discourage him.  Meanwhile Mickey is causing some problems for Sean Walker, he is stalking him and showing up at his screenings.  Sean shot a girl in Boston 20 years ago and Ray covered it up.  Sean wants Ray to intervene again and help him with Mickey.  Ray is busy in Boston and Sean fires Ray.

Tonight’s episode 7 looks like it going to be great and you won’t want to miss it. So be sure to tune in for our live coverage of Showtimes’s Ray Donovan episode 7 — tonight at 10PM EST! While you wait for our recap check out the sneak peek video below of tonight’s episode!

The show begins Ray getting money out of safe at his house. He is packing and tells Abbey he is going to Boston. She is pissed because he pulled a gun in front of the kids and now he is leaving. He won’t tell her who he is going to see in Boston. Things are uncomfortable between Ray and the kids as he tries to make chit chat with them but it gets interrupted when Marvin Gaye barges in with a gun. He is mad about Ray not telling him his mom was murdered. Ray drags him out and warns him to stay away from Bridget. Back at the house Ray tells Bridget to stay away from Marvin Gaye. Abbey wants to know what is going on but Ray says it doesn’t have anything to do with them. Abbey tells him he is scaring her. Ray leaves.

Van talks to Frank about the information he has on Sean Walker killing a worker and Ezra and Lee covering it up. Frank agrees to help him but then calls Ray with the information. Ray tells him it will have to wait until he gets back. Avi drops Ray off at the airport and warns him to be careful.

Mickey goes to a screening of one of Sean Walker’s old films. Sean makes and appearance but when Mickey gets up and screams his name, Sean runs out. He then calls Ray to tell him what is going on. Sean goes off on Ray who tells him to get a bodyguard. He then tells Ray he is fired. Sean goes back to the screening for a Q&A session. Mickey interrupts the session saying he has a thought for a script. An unknown actor comes to Boston kills a woman and frames a family man who ends up going to prison. The audience is intrigued and chants that Sean should buy Mickey’s idea.

Abbey goes to see Marvin to say how sorry she is about his mom. She tells him if he needs to talk she is there. Marvin opens up to Abbey about his mom being a drug addict who couldn’t raise him so she sold him. When Abbey presses for Ray’s involvement he tells her to ask Ray.

In Boston Ray meets with Eddie who says he picked the guy out of a line-up. Ray says he wants to talk to Sully but Eddie is said he is dead. Ray doesn’t believe him though and again says he want’s to see Sully. As he is leaving the bar some guys asks Ray if he remembers him, he doesn’t.

Mickey gets a call from Sean who tells him he is sending a car for him at 11:30 in the morning so they can meet. At the gym Mickey finds Bunchy sleeping there, he says he doesn’t like the house.

Bridget calls Ray to asks about what Marvin was talking about. Ray tries to explain that he was trying to get Marvin out of a bad situation. She has a hard time believing him. After they hang up he gets a call saying to go to Flannigan’s right now. Ray heads there only to find the guy who asked him earlier if he remembered him there. They guy and his pals beat up Ray, who gets some good shots in too and tell Ray to get out of town. Once again before he leaves he makes it clear he wants to see Sully.

After he gets back to his room and is nursing his wounds Ray hears a knock at the door to find a hold friend Gary there. Ray called him and the two catch up for a minute. Turns out Gary used to be involved with Bridget, Ray’s sister. Ray starts asking if Bridget talked to him about their father. Gary says he can’t look back at it anymore. Ray tells him to be safe before Gary leaves.

Ray finds Sully’s wife at a beauty salon. He tells her to tell Ray he wants to see her but she doesn’t respond nicely.

Abbey meets with Deb to talk about moving. She questions Deb about Ray’s apartment in the city. The chat about how Ray went to Boston and Abbey has no idea why. Abbey reveals that Ray hates Mickey because Mickey killed Ray’s girlfriend at the time Colleen.

Ray goes to the cemetery to visit Colleen grave, when he is lead by a woman to meet Sully. He wants to know what Ray is doing there. Ray replies that he is there to see him. When pressed Ray asks Sully to kill Mickey. Sully begins to laugh but Ray is serious. Ray tells him he is going to bring Sully to Los Angeles. Sully though is in hiding so Ray reveals once he gets done killing Mickey Ray will set him up anywhere he wants to go. Sully asks him why he doesn’t do it himself, he replies “I would if I could”. As for why he chose Sully, Ray shares he wants the last person Mickey sees to hate him as much as Ray does.

Sean takes Mickey to film studio so they talk about the movie. Sean makes it clear to Mickey that if he buys he film he owns it. Mickey is ok with that. While meeting Van calls Mickey in for a meeting.

Deb and Abbey continue their drinking as they shop. Abbey continues to complain about Ray. Abbey steals a pair of shoes from the store as the two drunk women run out they fall and are busted.

Frank meets with Van to try and get all the evidence he has but Van quickly questions who Frank is working for. Frank calls him paranoid and tells him to go at it alone if he doesn’t want his help.

Bridget and Marvin mix some music and drink. As Bridget is talking about how talented Marvin is she tells him that she loves him. The two start making out hot and heavy. Then Marvin wants her to give him oral sex but Bridget is not ready. He says his mom dead because Ray bought him she owes Marvin. He begins to get rough with her but Bridget fights him off calling him a slew of names.

Van finds Mickey at the gym and tells him he is wiring Mickey up to get a confession out of Sean. Mickey wants more money but Van isn’t budging he tells Mickey to get the confession or he is headed back to the slammer. Mickey goes into the gym and says they gym is closing early they are going to celebrate him being in the movie business.

Ray calls Sean demanding to know if he talked to Mickey. Sean says he didn’t but Ray tells him he is lying then lets Sean know he is digging his own grave. Frank calls Ray share that Van is going off on his own.

Abbey is released from jail to find Ray there waiting for her. She lets him know that she needs to make decisions too that it is not all about him. They have a moment.

Frank looks over a file that Ray sends him which is the video of Van being pulled over by the cop when he was on something.

At their house Ray and Abbey are about to get romantic when Ray finds Conner playing video games. The father and son have a talk and Ray learns there is something wrong with Bridget.

Ray goes into Bridget’s room, who is crying and tells what happened. Ray makes a beeline for Marvin as Bridget is screaming that it is all Ray’s fault because all he does is hurt people. Ray busts into Recon’s house and grabs Marvin who keeps saying he is sorry. Bridget is worried that Ray will kill Marvin, Abbey instructs Bridget to get away from the window. Ray puts Marvin in the car for a drive. Marvin keeps telling Ray he didn’t mean to hurt Bridget. Ray is silent the whole time. The show ends with Ray driving and Marvin telling him it is his new birthday.