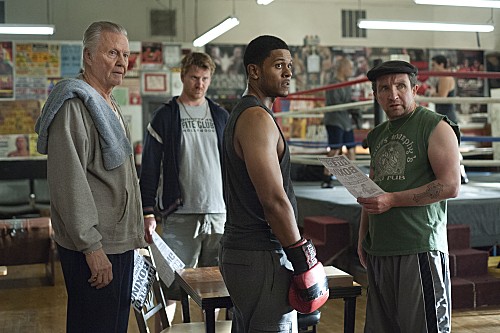 Tonight on Showtime their new drama RAY DONOVAN continues with a new episode called, “Road Trip.” On tonight’s show Mickey works with Van to get incriminating evidence against Sean Walker. Did you watch last week’s series fabulous episode? If you missed it you can read our full and detailed recap, right here.

On last week’s episode Ray let Marvin know in no uncertain terms to stay away from his daughter Brigit. Bridgit got a bellybutton piercing and Ray finds out that his wife knew about it and he was far from pleased about it.  Ray was also pissed with the man who sold a house to his brother and he wanted his brother to get a refund.  In Ray fashion he threatened the man and told him he would set fire to every property he had until  his brother got his money back.  I don’t think this situation is going to end well for Ray, the man does not look like someone to mess with.

On tonight’s show Mickey’s FBI contact, Van Miller calls him he wants him.  He wants him to get something on Sean Walker.  Van is fed up with people living with no consequences for their actions.   Ray goes to see Frank and asks him what he is doing about Van Miller, he tells Frank he better handle it by the end of the day.

Tonight’s episode 9 looks like it going to be great and you won’t want to miss it. So be sure to tune in for our live coverage of Showtimes’s Ray Donovan episode 9 — tonight at 10PM EST! While you wait for our recap check out the sneak peek video below of tonight’s episode!

The show begins with Avi driving Sully and Mrs. Sullivan at night. They stop at the side of the road so Sully can pee. Avi gets a call from Ray pissed for all the stopping.

Ray is sitting in the dark looking at the GPS tracker in Avi’s car when Connor walks in all pissed at him. Ray was supposed to set it up so Connor could go to the Kids Choice Awards with Tommy. Connor tells Ray Tommy is his friend and he never tried anything with him. Ray says he will talk to Tommy but Connor doesn’t believe him.

The flyers come out for Daryl’s fight.

Van comes to the gym and orders Mickey to talk to him. Bunchy and Terry wonder who Van is. Mickey tells Van to not talk to him like that in front of his kids. Van demands Mickey call Sean Walker and set up a meeting. Van reveals he knows all about Mickey’s overall deal with Sean. When Mickey is worried about his movie Van laughs that Mickey really thinks Sean is going to make his movie.

Ray shows up at Frank’s office wanting to know why he is avoiding him. Ray wants to know why Van has not been taken down and tells him to do it today.

In the car Avi and Sully talk about their mothers.

Ray tells Connor to skip school and get a suit for the awards show. Ray then buys a gun in a hotel room. He calls Tommy and tells him he is taking Connor but Tommy is drunk. He tells Ray that Marty is going to publish photos of Tommy and his wife Chloe, the two were married in Vegas two nights before. Chloe is of course a man, which is the big issue. Ray orders Tommy to text him where he is and to come outside and meet him. Ray finds a wasted Tommy outside a hotel taking pictures. Ray tells him to get it together because he is taking Connor to the awards show. Tommy reveals he told Marty that he was in love with Chloe.

Van wires Mickey for his meeting with Sean as he babbles on about how celebrities live without consequences.

Ray goes to meet with Marty and tells him to kill the photos. Marty says the photos are golden with Tommy in a tux and the he/she in a full on dress. Marty then tells Ray he is not killing anything and is not scared of him because he has his own muscle. Marty is going to do whatever he wants then reveals the story will break when Tommy is accepting his award.

Meanwhile Tommy, who was suppose to stay in the car is at a bar getting drunk with some chicks. Ray finds him as Tommy puts his penis in a woman’s hand. The woman is grossed out and Ray pays her to not tell anyone about it.

Abbey and Connor go suit shopping. Abbey sends a picture of Connor in his suit to Ray. Abbey calls Ray to make sure the awards show is for real. Ray tells her to tell Connor it is going to happen.

Tommy passes out in the car and Ray throws water on him to tell him to sober up.

Sean and Mickey meet to discuss the movie. Mickey asks Sean if it was right for a son to frame his father for murder. Sean tells him no one is responsible for that night things just happened. Sean says he found spiritual guidance after that night.

Arrangements are made for Connor to be Tommy’s guest at the show, despite the bad shape Tommy is still in. A IV full of drugs is hooked up to Tommy to help him come down off all the booze and drugs.

Mrs. Sullivan gets carsick and wants to stop. Avi says no they can’t get a motel. She begins to freak out that the dog is ok. Sully requests to stop for a couple of hours.

Ray asks Lena about Marty’s security Chip. Lena says she thinks he is Marty’s boyfriend. Tommy decides to pay Marty for the photos and Ray lets him believe that is the right thing to do.

Sea breaks down as he talks to Mickey about the night he killed Colleen. Van listens as Sean reveals the details of how he felt. Soon Sean stops talking reminding Mickey they are there to discuss his story not Sean’s.

When he learns Avi, Sully and Mrs. Sullivan have stopped at a hotel he is pissed. Avi tells them those two are out of their minds. Ray calls it amateur hour. Ray tells him to get them back tonight.

Terry calls Ray looking for mickey and tells him about Van’s visit. Terry wants to know if Mickey is in trouble. Ray tells Terry to stay out of it. Ray immediately calls Sean and learns that Mickey is in with Sean. This pisses Ray off and he calls Frank. He sends Frank a file of his daughter and a woman, who is not Frank’s wife. Lena took pictures of the woman and girl who are Frank’s mistress and daughter. Ray threatens to tell Frank’s wife he doesn’t do what Ray needs.

Avi is mad when he finds Sully outside the hotel. Sully reminds him he has been doing this for 20-years and knows how to keep his head down. Meanwhile inside the room Mrs. Sullivan makes a phone call telling someone she would be in touch soon. Sully walks in and wants to know who she was on the phone with. She reveals it was her parents but that she did not tell them where they were going. Sully pushes her for what she said and learns she may have said California. He chokes her with the dog leash killing her. When he comes out of the room without her Sully tells Avi that Mars. Sullivan had a change of heart and is not coming with them. Avi gets out of the car and goes back into the room to find the body on the floor. He calls Ray to tell him what happened. Ray tells him to take care of it then get back to Los Angeles. Avi buries the body in the desert.

Sean gets back to talking about the film with Mickey. They come up with a great idea they are both excited about. Sean tells Mickey the movie is going to be huge, getting Mickey all happy.

Tommy and Ray go to pay off Marty. While they wait Tommy tells Ray that Connor has a girlfriend. Tommy then wonders if they are just paying Marty off why are they in the basement of a parking structure. Ray gets out of the car and gets a baseball bat puts a mask on his face and takes out the security camera’s. When Marty comes out Ray runs his car at him hitting him. Ray tells Marty if he ever goes back on deal with him again he will kill him.

Van is pleased as he takes the wire off of Mickey. He opens a beer to celebrate and shares it with Mickey. Van plays back the tape as Mickey listens.

It is Teen Choice Awards time and Tommy is finally sober. Ray tells Tommy to take care of Connor that night. Abbey brings Connor and Ray tells his son how sharp he looks. Tommy tells Abbey how messed up he was in the morning but Ray helped him. Connor lets Ray know he is still made that Ray hates Mickey. He tells Ray Mickey is funny and talks to him.

Ray calls Frank, who tells him he is taking the evidence on Van to his bosses now. Sully meets Ray at the hotel room in L.A. he tells Sully he got him a car. Ray tells Sully he got a taxi and that he is going to do this thing his way. Ray agrees but reminds Sully he says when. Then also reminds Sully that he will also need to take care of Mickey when it is done. It looks like the night of Daryl’s fight is when it will all go down.

Mickey and Van drink and talk about the evidence that can put Ray away. Mickey learns that no one else in the FBI knows what Van is doing because he doesn’t trust his boss or anyone else at the FBI. He gloats in his win, as he stares at the pictures of Ray and the others he intends to prosecute. Mickey shoots Van in the back.