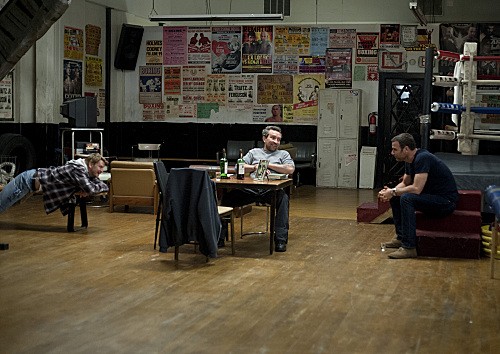 Tonight on Showtime their new drama RAY DONOVAN continues with a new episode called, “Bridget.” On tonight’s show Ray, Terry and Bunchy toast the anniversary of their sister’s death. Did you watch last week’s series fabulous episode? If you missed it you can read our full and detailed recap, right here.

On last week’s episode Ray was heading to Boston to see Sully, problem is Sully did not want to see Ray.  Ray was not leaving Boston until he saw Sully, he did not care how many people try to discourage him.  Meanwhile Mickey was causing some problems for Sean Walker, he was stalking him and showing up at his screenings.  Sean shot a girl in Boston 20 years ago and Ray covered it up.  Sean wanted Ray to intervene again and help him with Mickey.  Ray was busy in Boston and Sean fired Ray.

On tonight’s show we know that last week Ray took Marvin away after he got a little to aggressive with his daughter, Bridgit.  It looks like Bridgit and Marvin get up to something this week and Ray finds out that his wife knew about it and he is not pleased.  Ray is not pleased with the man who sold a house to his brother and he wants his brother to get a refund.  In Ray fashion he threatens the man and tells him he will set fire to every property he has until he does what he wants.  The man does not know who he is dealing with.

Tonight’s episode 8 looks like it going to be great and you won’t want to miss it. So be sure to tune in for our live coverage of Showtimes’s Ray Donovan episode 8 — tonight at 10PM EST! While you wait for our recap check out the sneak peek video below of tonight’s episode!

RECAP: We see this guy pouring gasoline all over a room and hen he lights a match in the house, walks out and lets it burn to the ground. Ray gets out of the shower, we get an awesome backside view of him. Bridget got her belly button pierced, the blood pours out on to her shirt and she has to change.

Ray calls the guy whose house was burned down and tells him that he wants the money back or he will set fire to every house that he owns.

Bridget’s mom found the blood on the shirt, she is mad that she got the piecing without her. Ray walks in and is mad, Abby tells him that she wanted to pick the place, but she went on her own. Abby asks Ray why he doesn’t beat her. Bridget then tells Ray that her therapist said it was ok, Ray didn’t know she went to see a therapist. Abby says it was because Bridget was sexually abused.

Ray goes to Bridget’s room, she asked if he killed Marvin, he says no. Ray tells her to take out the piercing or she is not leaving the house, they had a deal.

Marvin gets a text message from Bridget, she tells him that she accused her dad of killing Marvin.

Mickey is at a spa when Mrs. Davis walks in, they start talking and he tells her that he was sent away for something he did not do, 20 years. She tells him that she likes to write, her husband was a director.

Ray goes to see Bunchy, they share a drink and Terry joins in while they toast their sister and Terry reads William Shakespeare because it is their sister’s birthday.

Ray asks Bunchy why he set his house on fire, he says because he didn’t like it. Bunchy asks Ray if he is going to get his money back for the house. Terry is with his girlfriend, she is married and cannot leave him until her kid leaves the house who is seventeen. She has a black eye, thanks him for the support and then leaves.

Abby goes into Bridget’s room to bring her something to eat, she finds her gone and the words f*ck you written in blood on the mirror.

Lena is talking to Avi, he tells her to tell this woman the she loves her, but Lena says she doesn’t.

Bridget is on the bus, meanwhile Terry arrives at his girlfriends house and tries to beat the crap out of her husband. Terry then says to the guy that he is sorry, he didn’t know she was married and he says she is not a lady, she is a f*cking whore.

Back to the spa with Mickey, he tells Mrs. Davis about his children, about his daughter being gone.

Abby is out looking for Bridget, Ray calls to check up on her and she says everything is good, Bridget is sleeping.

Bridget is in Compton all alone. Lena goes to see this blond woman and hits her in the face, almost breaks her nose. Mickey is done with his spa treatment, Mrs. Davis invites him for a drink, he says ok and when they get there, he asks her if she knows how to twerk.

Bridget is with Marvin and they are looking at pictures of his mother when he bends over and kisses her. Bridget wants to know what her father did to him, he says nothing.

Ray got the guy who took advantage of his brother, he tells him that he wants the money back and keeps tasering the guy until he consents to giving him the full amount back.  Lena walks in, Avi asks her how things went, did she talk to the women, she says everything went well.

Bridget shows off her piercing, she says her parents over reacted, then she tells Marvin she wants to have sex and he says no because her father put a gun in his mouth. Marvin calls Abby and tells her that Bridget is with him.

Mickey tells Mrs. Davis that he thinks he is too old to screw her, but asks if she will give him a *low job. She says he would have to put a gun to her head, he says excuse him for a minute. Mickey gets a gun, tells her to get on her knees and suck it. She starts to cry, he then tells her he is sorry, he thought he was following her lead. She tells him that she is going to leave, he tells her that she has fake tits and that he wants her to leave.

Back to the three brothers, they are standing over a drink again and their sister’s picture.

Abby picks up Bridget and asks if she had sex, Bridget calls her and Ray racist and says her father is an animal because he put a gun in Marvin’s mouth. Abby says that if Bridget is pregnant, she is not getting an abortion.

Mickey walks in and finds his three sons, he asks what they are doing and Ray calls him a prick because he doesn’t know that it is his daughter’s birthday. Bunchy tells Ray he wants the money, but Ray won’t give it up and tells Bunchy that he had to burn a house down and torture a guy to get it.

Terry is alone and his girlfriend walks in and asks him why he kept screwing her when he knew she was married, he says it is over between them.

Ray is home, Abby and him start to get into an argument, sort of and he calls her f*cking nuts.

At home, Ray goes in to see Bridget and she asks if she is in trouble. Ray decides to tell Bridget why his sister killed herself, she was pregnant and on drugs. He claims that this is the reason why he worries about her so much, because somethings in life you cannot take back and they change you forever. Ray asks her if she took the piercing out, she says no. Ray looks at the wound and it looks really sore. Ray cuddles with Bridget and sings a song to her that he used to sing when she was little.

The police arrive at Lena’s apartment and she is arrested.

Marvin is making a video of himself.

Mickey is looking at a picture of his daughter and crying.

Bridget has fallen asleep, Ray kisses her and notices what she wrote on the mirror.