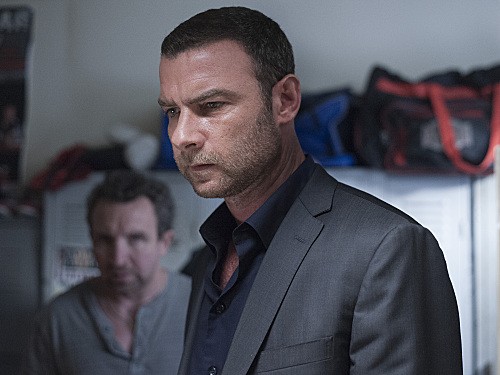 Tonight on Showtime their new drama RAY DONOVAN continues with a new episode called, “Bucky F**kn’ Dent.” On tonight’s show Ray is called to handle a crisis. Did you watch last week’s series fabulous episode? If you missed it you can read our full and detailed recap, right here.

On last week’s episode Ray’s plan with Sully was put into action.  Mickey had a rendezvous.  Sully encountered Mickey, he showed up at Mickey’s with a gun.  Ray went to see Daryll and asked him if he is Micky’s son because he does not want to fight until Mickey showed up.  Abby started to suspect that something was going to with Ray and she was not happy.

On tonight’s show Bunchy has a violent encounter. Ray is called to handle a crisis.  The Feds find Van dead and they realize he was investigating Ray.  Abby tries to find out what is going on and she asks Avi who denies anything is wrong, she does not buy it.  Ezra asks Ray a favor.

Tonight’s episode 11 looks like it going to be great and you won’t want to miss it. So be sure to tune in for our live coverage of Showtimes’s Ray Donovan episode 10 — tonight at 10PM EST! While you wait for our recap check out the sneak peek video below of tonight’s episode!

RECAP: The show opens with Ray going to visit Ezra who tells him that he is not well and Deb is too old to take care of the baby. Ezra calls it a tragedy and Ray tells him to give him a f*cking break. Ezra says he knows he is asking him to do a terrible thing, Ray says he is not killing his father.

Mickey has a knock at the door, it is LAPD who asks them if they are Jehovah Witnesses. The cops say they want to ask him questions about Sean Walker.

Terry is having sex and Bunchy walks in and says he f*cked up real bad, Terry calls Ray and tells him to get over there right away.

Avi is in the kitchen and Abby is annoyed, she wants him to leave but he swears he is just there to check on the alarm system.

Ray gets over there and finds blood everywhere, Bunchy says it was an accident. Bunchy shot the priest and says he didn’t mean to, the nurse is there and tries to stop the bleeding. Bunchy says he shot him because the priest was doing the same thing to a little boy that he did to him.

Ray has got the gun, he rubs the hand prints off and tells Bunchy he is not going to jail, he promises.

Mickey is still with the police who are asking him questions.

Bunchy is telling Ray what happened, he jumped into the priests house last night and just wanted to ask questions but then the gun went off accidentally. Bunchy says he rode his bike and it is still in front of the priests’ house. Bunchy says the priest sounds like he is in a lot of pain, Ray says “who gives a f*ck”. Ray calls Lena and tells her to go to the priests’ house and get the bike, also find out if anyone heard anything weird.

The priest keeps screaming that he needs to go to a hospital, Ray tells him to shut the f*ck up. The priests tells Ray he has to help him, Ray walks out and tells him he doesn’t have to do anything.

Avi is still at the house, Abby offers him breakfast; the kids are asking questions about Sean Walker’s killing.

The cops are finally done with Mickey, he claims he was at a boxing match the night before and stepped out for a bit to be with a woman. The cops want to know who the woman is, or they are going to bring Mickey into the station. The cops are gone, Mickey calls his lady friend and tells her that he needs to see her, it is life and death.

The man who cleans the gym arrives and Terry asks him to leave. Meanwhile, the priest is trying to get away and Bunchy stops him just as Daryll walks in.

At breakfast, Abby asks Avi if he is seeing anyone and he says no, he is too busy. Avi wants everyone to stay in the house, he tells Abby that nobody leaves until he hears from Ray. Abby calls Ray and he tells her that it is because of the press and he wants her to stay put. Abby goes to get her keys, she calls Conor and Bridget, tells them she is going into town and Avi is in charge.

Terry tells Ray that they needs to get the priest to a doctor, Ray doesn’t want to because he is afraid that Bunchy will go to prison, Terry offers to take the rap.

The priest is with Bunchy and begs him to get some help. Bunchy recounts what the priest told him when he was a little kid, how he made him perform sexual acts with him. The priest says that he cannot say sorry, because he didn’t know him when he was little, he claims it wasn’t him that abused Bunchy.

Lena couldn’t find the bike and somebody heard gunshots, but said that they hear them all the time, so it is nothing unusual. The priest is still screaming for help. Ray tells Terry that there are no witnesses and the priest can disappear. Ray tells the priest to tell Bunchy that he is sorry for what he did to him. Terry and Bunchy pull Ray out of there because he is starting to get rough with the priest. Bunchy tells Ray that it is all his fault, there must have been something that the priest saw in him. Ray blames himself for what happened to Bunchy.

Avi is playing video games with Conor and tells him about being in the army in Israel.

Ray tells the priest to get up and to apologize to Bunchy. The priest says that he is father O’Connor from St. Josephine, he was close to their mother. He claims to have cared for all the boys because their parents were not around, he admits to doing things that are inappropriate but only because he loved children. He goes on to say that he was in treatment for two years and had chemical castration. Then he says that in the eyes of God we are all sinners. Father O’Connor looks at Bunchy and asks him if he forgives him, then Abby is knocking at the door. Ray goes to the door, Abby sees blood and runs up the stairs. Father O’Connor asks her to help him, she walks away.

Mickey is in his apartment with his old girlfriend and asks her to say that she was with him the night before because he is in a jam; she will do it.

Terry tells Ray that they need to take the priest to a hospital now, or he is going to die. Bunchy also wants to do it, Ray says ok, but he will take him alone. Ray tells Terry to stay and clean up the mess, take care of Bunchy. Father O’Connor tells Terry and Bunchy that Ray is going to kill him, then he turns to Ray and tells him not to do it because he loved him. Ray pulls out his gun and shoots the priest in the head, Bunchy says he is glad he did it. Obviously the priest abused Ray as well.

Mickey is in his living room dancing with his ex girlfriend and tries to sway her into the bedroom, but she tells him she needs to leave.

Ray got rid of the body, he is back home and pours himself a drink. Conor calls Ray and says he is with Avi and wants to be a Jew like him because it is so cool. Abby has her bags packed, she tells Ray she had Avi take the kids to a hotel. Abby asks Ray if the priest abused Bunchy, he says it wasn’t only Bunchy. Abby tries to jug him and tells her not to touch him, then he tells her she should go.

Frances shows up at the gym and asks Terry if he took the priest to the hospital, he says yeah and she wants to know which hospital.

Ray is still drinking all by himself when he gets a call from Frank who says that Van is dead and he is going to take Ray down for doing it.