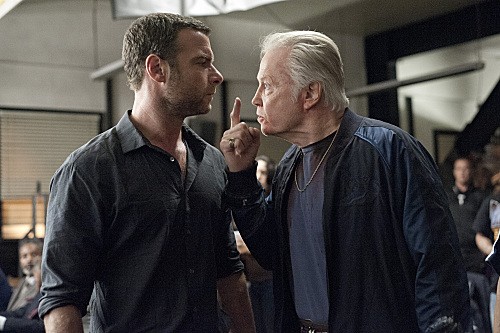 Tonight on Showtime their new drama RAY DONOVAN continues with a new episode called, “Fite Nite.” On tonight’s show Mickey has a rendezvous. Did you watch last week’s series fabulous episode? If you missed it you can read our full and detailed recap, right here.

On last week’s episode Mickey’s FBI contact, Van Miller calls him he wants him to get something on Sean Walker.  Van was fed up with people living with no consequences for their actions.  Bad luck for Van Mickey found out he was acting outside the bureau   Ray went to see Frank and asked him what he was doing about Van Miller, he told Frank he better handle it by the end of the day.  Unbeknownst to them Mickey handled the situation.

On tonight’s show Ray’s plan with Sully is put into action.  Mickey has a rendezvous.  Sully encounter Mickey, he shows up a Mickey’s with a gun.  Ray goes to see Daryll and asks him if he is Micky’s son because he does not want to fight until Mickey shows up.  Abby starts to suspect that something is going to with Ray and she is not happy.

Tonight’s episode 10 looks like it going to be great and you won’t want to miss it. So be sure to tune in for our live coverage of Showtimes’s Ray Donovan episode 10 — tonight at 10PM EST! While you wait for our recap check out the sneak peek video below of tonight’s episode!

A fat man is digging what looks to be a grave in the middle of the day. Ray is looking at his old boxing gloves, trophy and pictures as his son walks in and he tells him about his father beating them as kids. There is knock on the door and Abby answer it to see Ezrah. She goes to get Ray for him. Abby comes up to interrupt them for Ezrah and Ray goes downstairs to meet with him. Ezra bring Don a bag that he says is “her” legacy and to not let Nicky taint it. He’s going over the plan for the night and that Ray needs to stay at the boxing match because it will be his alibi.

Brendan Donovan is talking to a church man trying to get him to recognize him. He looks very upset. Mickey is talking Daryll getting him ready for the fight. He brings out a pair of shorts that they got for him to wear during the fight. Mickey is getting his mind ready for his fight. Mickey gets a phone call and says theat he didn’t expect to hear from him again. Brendan tells Mickey that he killed the wrong Father and Mickey tells him to quit being a baby and eal with it. Abbys is asking Ray what Ezra was doing here as he tells her how beautiful she is. He tells her that he wants another kid. She tells him that she wants a new house. She asks him what’s going on with him and why they’re going to the fight. Mickey walks into a diner and its down with the woman that he made give him oral sex. She asks him if he’d ever done that before and he says no but she asks again if she asked for it somewhat unintentionally. He tells her that he was really just following her lead and she smiles.

Ray is driving to the fight as he gives Abby and his daughter diamond ear rings. They get to the boxing gym where the fight is preparing to begin. Abby tells them Daryll is really their uncle but that he’s just from a different mother. Mickey and his friend are getting dressed from having sex. She is trying to find her bag to leave as she gets grabbed. Mickey gets punched in the face and told that they’re going for a drive. Terry asks Ray what’s going on with him and why he’s actually there because he never comes. Ray tells Terry that he wouldn’t be so sure that Mickey will be there because he’s never been there for any of them. Mickey is trying to talk about Sully’s mom but tells him to be a man and stfu cause it’s not going to work. Mickey asks him how he found him and he tells him that Ray found him. Daryll asks him if he’s blaming him, but he says he blames Mickey. Ray asks them to put it aside and that he is just there to see him fight. He tells him he didn’t bring his son to see a Donovan lose. Sully gets Mickey and the woman out of the car. Mickey tries to plead with him but he tells him it’s still not going to work.

Sully’s collection guy shows up to get the money from Ray right then as Ray tells him to leave his family alone. Brendan is still very upset as Ray reminds him of everything that they did for him as kid when Mickey didn’t. Sully tells Mickey’s date to walk back to the car because he’s going to let her go but he shoots her as she’s walking away. Sully tells Mickey to stand by the hole. Brendan is talking to Ray’s son about how tough his father is and that he needs to be as tough as his Dad and to never let anyone take advantage of him. Sully gives Mick a smoke while his partner is digging his grave. They’re talking about a man that they killed that a stray dog drug off and ate some of  and they have a laugh. Abby tells the kids to walk away because she wants to talk to Ray. Daryll is still wondering where Mickey is. Abby walks up to Sully’s collection guy not try to find out how he knows Ray. He walks away as she questions him and Ray is watching her. Sully tells Mick that it’s time. He tries to plead with him again but he says he doesn’t care again because Ray is paying him, but that he would do it for free anyways for putting his whole family away. Mickey tells him that he’s not the one who killed Colleen and that he can prove it. Ray is in Mickey’s room and pours himself another drink. Abby walks in to caress him. They’re about to have sex when she asks where Mick is. She says she’s not stupid putting the pieces together between Ezra and Sully’s collection guy. She tells him that she’s his wife and not to ruin this as he apologizes heavily.

Sully’s collection guy tells Ray it’s done and he’ll get him the money. Mickey calls Sean about an ending for the movie and to let him in. Mickey ratted him out to Sully that he was the one and Sully shoots him. Ray tells Daryll that he is a Donovan than he better get used to Mickey letting him down and that he doesn’t need him. Sean’s murder is all over the news as Mickey walks into the boxing gym behind Ray. Mickey tells him what happened and Ray goes to leave. Abby chases him down asking him what he did. Ray yells asking why she’s always taking his side even though he is her husband and she never gives him any credit. She tells him about sending him letters and pictures of the kids when he was in jail. Mickey walks back into the bathroom to find Daryll. Mickey gets him pumped up for the fight and ready to go. Ray is in his car driving as Daryll’s match starts.. Ray calls Ezra telling him what happened with Sully and Mickey and the money and he asks him how he’s going to fix it. Daryll is getting beat in the match. Brendan is drinking on the roof’s edge as the fight goes on.

Daryll knocks out his opponent and wins the fight. Ray breaks into what was Sully’s hotel room with his gun in hand to find Sean’s baby.