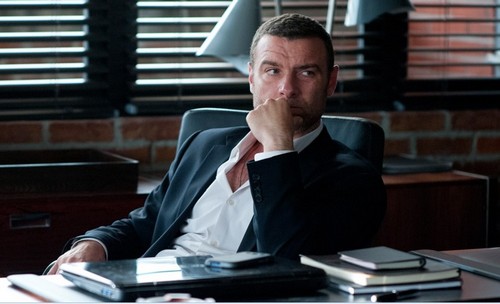 Tonight on Showtime their new drama RAY DONOVAN continues with the season 1 finale called, “Same Exactly.” On tonight’s show Ray leaks Sully’s whereabouts to the press.. Did you watch last week’s series fabulous episode? If you missed it you can read our full and detailed recap, right here.

On last week’s episode Bunchy had a violent encounter. Ray was called to handle a crisis.  The Feds found Van dead and they realize he was investigating Ray.  Abby tried to find out what is going on and she asked Avi who denied anything was wrong, she didnot buy it.  Ezra asked Ray a favor.

On tonight’s season finale Mickey goes to Ray and tells him that he thought if he came out to see him everything would work out but Ray agrees that did not work.  Mickey tells Ray that he did 20 years for him, but Ray tells him there is no forgiveness for him.  Meanwhile Abby starts to realize that that Mickey is not what she thought he was.  She reaches out to Ray to come home.

Tonight’s season finale looks like it going to be great and you won’t want to miss it. So be sure to tune in for our live coverage of Showtimes’s Ray Donovan episode 12, season finale — tonight at 10PM EST! While you wait for our recap check out the sneak peek video below of tonight’s episode!

RECAP: Avi and Ray are running after Eddie who ends up getting hit by a car, Ray wants to know where Sully is. A police is on the scene, Ray tells him to be smart and keep his mouth shut and they will take care of him.

Frank confronts Ray and he tells him that he is going to give him 12 hours because he knows he is telling him the truth, then he passes a wad of cash to Frank.

Bunchy and Terry are cleaning up at the gym and Bunchy says that he feels bad about what happened to the priest. Bunchy says he is going to stay in his apartment from now on, he needs a break.

Connor is eating a huge breakfast and Bridget knows that he is only eating because he is upset. Bridget goes in to wake up Abby and she snaps at her.

Avi asks Ray if he called Abby and he asks if he is marriage counselor and then yells at him to just do his job.

Bunchy tells Mickey that he doesn’t want him in his apartment anymore. Mickey tells him to take the bed, he can live on the couch. Bunchy wants to live alone and tells Mickey if it wasn’t for him, it wouldn’t have happened. Mickey goes on to say that he got drunk and shot the priest, then Ray had to take care of it. Mickey wants to know what Ray thinks about it. Mickey is surprised and tells Bunchy that maybe he is right, he is a bad influence.

Sully sits near this guy on a park bench and asks him if he has id, he wants to buy it from him for $300.00 and the guy says yes. They head on into a restroom and the guy pulls a knife on Sully who then grabs the knife and kills him. Sully is pissed that he killed the guy, but felt he had no choice.

Mickey calls Connor and finds out where he, his sister and mother are. Mickey gets there and falls asleep on the bed beside Abby who wakes up beside him and freaks out. Mickey tells her that she needs to get up and be a mother to her children. Meanwhile, Ray has sent Lena to check on the family.

Ray finds Tiny at an all-you-can-eat buffet and tells him that he has a lot of problems, first Sully is going to kill him. Ray tells Tiny that he got Eddie and they got some of the money, but he wants the rest of the money. Ray says the deal is he can keep half the money and the passports and he takes Sully away. Tiny says he doesn’t trust Sully anymore and asks Ray if he can work for him. Tiny says he has no family and he doesn’t blend in, Sully won’t take him with him, Ray walks out.

Abby takes Mickey aside and asks him what he wants, Mickey claims that he is there just to check on them. Abby then asks Mickey if he knew that Ray was also abused by the priest that abused Bunchy, Mickey says yes but everyone in their neighborhood was abused.

Mickey calls Ray and tells him that he wants to see him before he leaves town forever, Ray agrees to meet him. Ray then walks in on Ezra who tells him that he is going to marry Deb. Ray tells Ezra that Sully didn’t take the bait and when Ezra tries to tell him what to do he tells him to let him do his f*cking job.

Lena is with Bridget to check on the family, she tells her that Connor went upstairs with her mom because he got sick and threw up in the hot tub. Lena then goes for a walk with Bridget, they talk about a boy she used to like and calls her father a f*cking racist. Lena says that Ray really helped her out when she first met him.

Abby is alone in her bedroom, she calls Ray and tells him to come home.

Tiny and Sully are playing cards when Sully sees himself on the news, there is a maid in the room and she sees it too and tries to pretend like she heard nothing while she is making the beds. Sully goes over to the maid, someone is at the door and the maid quickly makes an escape. Sully is furious and calls Tiny a lard ass and to hurry up because they have to get out of there.

Ray is at the gym, Mickey is there and says he is worried about him, then he asks if he is going take out Sully. Mickey says that he had an idea, that if he met with Ray everything would work out. Mickey says that everyone makes mistakes, then he says he is going to leave town but he wants to know first why Ray wanted to have him killed. Ray asks “are you f*cking kidding me?”. Mickey says that he should have stopped Bunchy from fighting, he got too many hits to the head. Ray then mentions how he was screwing a black woman behind his mother’s back, Mickey says it his not his fault that he likes black women. Mickey then says that he went to prison and took the rap for him and Ezra. Ray can’t believe what he is saying. Mickey goes on to say that Ray was always his favorite and the two of them are exactly alike. Ray tells Mickey that he told him what happened with the priest and he called him a liar and beat the shit of him, he didn’t stop the priest who kept after him and then went after Bunchy. That is when Ray decided to kill Mickey, he’s been dead to him since that day, since he was ten years old. Mickey says he is sorry, Ray calls him a prick and tells him that there is no forgiveness for him. Avi walks in and says they called and want to meet at the marina, Mickey shouts “whats your plan boy” and Ray walks out with Avi.

Bunchy sees a kid on his bike and asks him where he got it, the kid says he didn’t steal it, he found it.

Terry is with Francine and he tells her that the priest is dead, but they didn’t make it to the hospital. She wants to know and Terry freaks out and screams at her that he is loyal to his brothers and if it’s a problem, it’s a problem. She turns around and asks what they did with the body, he says they got rid of it. She asks him what she should do with the information and he says do what you have to do.

Ray and Avi are at the marina waiting for Scully. Riny, Scully and Mickey walk up, Mickey tells him not to look so surprised that he asked his old pal to take him with him. Ray pulls out the passports and says he wants to see the money first to Tiny. Sully shoots Avi, then tells Ray that is to show not to f*ck with him. Mickey looks at Avi’s body on the ground and just walks past him following the rest to the boat. Frank is on the boat and Sully tells him to drop his gun, Mickey goes on the boat to get the gun. Sully tells Ray that he is taking all the money. Mickey shoots Sully in the head, then Ray shoots Frank in the arm to make it look like a shoot out, he moves the guns around to make it look real then runs to check on Avi. Frank turns to Tiny and tells him that he was never there and get the f*ck out.

Mickey goes over to Ray and tells him that he saved his life so they are even now. Ray gives Mickey some money and tells him it should be enough for a plane ticket to somewhere. Mickey tells Ray to stop clinging to the past and move on.

In the hospital, Lena walks in and finds Ray in Avi’s room.  Ray leaves the room and finally listens to his voice message from Abby who begs him to go home and tells him that she loves him.

Mickey didn’t leave town, he went to buy some alcohol and joins the boys at the gym for a drink. Mickey toasts to life and Terry doesn’t look impressed. Mickey asks Terry if he still has that cot that Bunchy slept on, he says sure.

Bridget walks down to the beach and she finds Ray on one of the beach chairs lying in the sun, Conor walks up and asks if he is dead because he sees blood on his shirt, she tells him she thinks he is sleeping. Abby also walks up and takes the chair beside Ray and lies down, then she gets up and goes to lie beside Ray who wakes up and puts his arm around her.