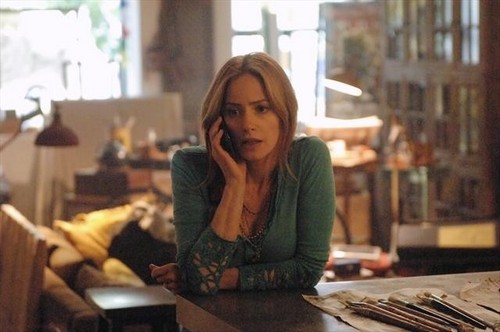 Tonight on ABC there new family drama series RED WIDOW airs with a new episode called, “The Consignment.” On tonight’s show in order to pay off her debt to Schiller, Mara must orchestrate the importation of an illegal drug shipment.  Did you watch last week’s episode?  We did and we recapped it here for you.

On last week’s show in exchange for his stolen drugs, crime boss Schiller told a still grieving Marta he wanted her to import a shipment for him. But she didn’t know when or how he would contact her. She believed if she was successful, she would be free from Schiller’s control. While waiting, she enlisted Mike and her father, Andrei, to teach her the criminal business. Their first step was to find a customs official to pay off – requiring an uncomfortable Marta to use her feminine wiles and rethink how far she is willing to go to protect her children.

Meanwhile, her young son, Boris,was still reeling after having witnessed his dad’s death; Andrei had his bodyguard, Luther, kept watch over Marta’s family; Marta’s sister, Kat, steps in to help out at the house, causing conflict with her new husband; Marta’s brother, Irwin, fought for his life while in jail for gun possession; and a suspicious Natalie asked FBI Agent James Ramos if her father was involved in illegal activities.

On tonight’s show Marta’s drug smuggle hits a snag when crucial details change at the last minute. She is forced to think on her feet, and is surprised by her own savvy. Meanwhile, her children become unwittingly involved in the FBI investigation against her, and Boris recalls a disturbing memory from his father’s murder.

Tonight’s episode 3 is going to be exciting, and you won’t want to miss it. So be sure to tune in for our live coverage of the season 1 episode 3 of Red Window — tonight at 10PM EST! While you wait for our recap, check out a sneak peek of tonight’s episode below!

Marta is given a call about how plans have changed. Marta tells Kat that she has less than one hour to pull everything off. Kay says it’ll work out. Marta says she could end up in jail or dead. Kat says she just has to survive today. Marta then tries to get the kids ready for school.

Gabriel invited their neighbor, Bliss, over to the house. Marta wants to know why she’s there in a bikini and why he isn’t in school. The kids says it’s teacher evaluation day. Marta says the girl has to go and to keep the door closed. She needs to now they’re safe.

Pablo calls Mike but Mike makes an excuse to leave.

Marta has a meeting with one of Boris’ counselor who says he knows that how much she wants him to remember the murder. She thinks a proper show of emotion may be good. Bob calls Marta and says that Logan tricked him. Marta realizes that they are now being blackmailed.

Natalie wants to know why Marta is asking so weird. She denies the accusation. Natalie comes outside once she heard Mike honking the horn. Natalie wonders if he needs help with guns but an impatient Mike keeps honking the horn. Inside the house, Marta pulls some cash out of a pillow.

Natalie tells Gabriel that she thinks whoever killed their dad is now threatening Marta. Gabriel says that Marta has it under control. Gabriel leaves with the girl next door.

Marta wonders what undercover cops look like. Mike says like everyone else. She keeps wondering who is a fed and who’s not. Mike says Logan did not call the Feds—he just wants the money but she refuses. She says that Logan tried to strangle him but he never saw her face. Pablo shows up at Mike’s house. Mike says he needs a couple of more days. Pablo says he really likes his wife.

Marta gets back in the car and tells her to drive because her instincts are telling her that something is off.

Kat calls Marta, but it’s her mom complaining about house guests. Kat asks if she’s okay. Marta wants Kat to check on the kids. Kat tells her to be careful.

Boris is out with Natalie. He has a flashback of his father being shot to death. Natalie grabs her little brother who is lost in a trance.

Mike and Marta get on the road and try to follow the truck with Bob tagging along. Gabriel tries to impress the girl next door. Kat calls him and tells him to get home ASAP since Boris and Natalie are missing. Kat tells Marta that she can’t get in contact with Natalie. Mike tells her to get off the phone while a frustrated Mike wants t focus on the task at hand. Marta gets through to Natalie’s cell but Agent Ramos picks up. Marta says he is not to question her kidsor else she will sue for harassment. Agent Ramos says that Natalie is the one who tracked him down.

Boris tells Natalie a memory of when their father was killed. Natalie tells him to be quiet.
Bob is shot in the back by one of Mr. Schiller’s hitmen. Mike tells marta that is Schiller was going to kill them, he would’ve done it there. There are pictures of Marta at the port and she is identified. Agent is warned about her becoming his new cause.

Marta wants to know why Schiller killed Bob. Schiller says he was a liability. He wants her to work for him. Kat says the only thing Marta did was survive. Marta says she and the kids have to disappear.