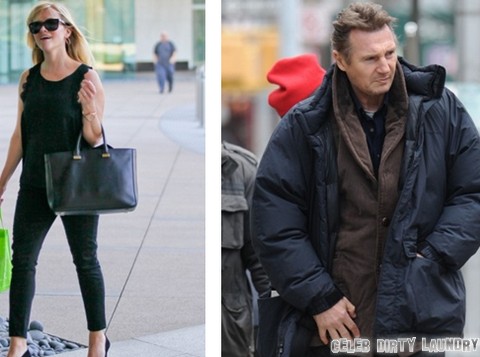 Here’s a story that I never in a million years thought would ever cross my desk. Late last fall Liam Neeson split from his PR hound girlfriend, Freya St. Johnston in order to focus solely on being single dad to his two children with the late Natasha Richardson.  I’m sure that there has been a random hook up (or twelve) in the months that have followed, he’s still a man after all, but nothing serious seems to have evolved.

Now take Reese Witherspoon, mom of three, supposedly happily married to Jim Toth. She has a new baby and has gushed endlessly about how great her new marriage has been. The second time around appears to have been really sweet for Reese- or has it?  Just yesterday rumors started to swirl about Liam and Reese getting extra chatty and comfortable with each other at one of the biggest award parties of the season. Supposedly the two hooked up earlier this year during a major awards show week, at least according to Blind Gossip.

I know, you’re shaking your head and saying, “No f**king way Cate. This did not happen,” and I have to admit, I hope you’re right. What I do know is that truth is often stranger than anything that you and I can dream up and that we are all human. Even the squeaky-cleanest of people make huge missteps or cave in to lust on occasion.  Did Liam and Reese get hot and heavy and then walk away as if nothing ever happened? Could it be one of those moments that neither of them will ever speak of nor admit to, but they’ll carry the memory of whatever transpired with them forever?  Stranger things have happened, right? Tell us your thoughts in the comments below!