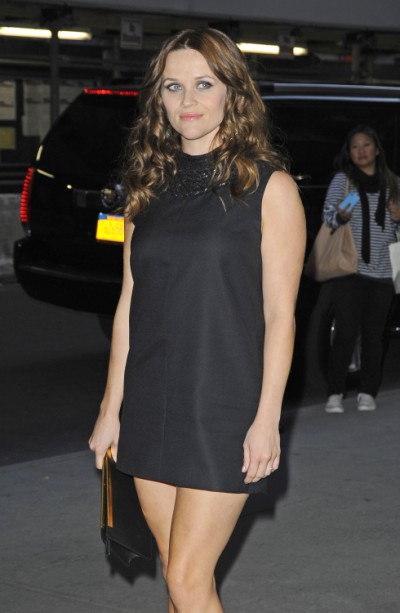 Is this Reese Witherspoon’s first little scandal? I think it is. She had the whole divorce shocker from Ryan Phillippe but she came out looking like the good guy in that so her golden girl reputation was left firmly in tact. But now we have disorderly conduct! Reese Witherspoon came to the party a little late but clearly she likes to throw down. But I’m not going to spend this post bashing  her. She and her husband were careless and stupid. We know it. They know it. Reese Witherspoon’s apology stated it. Lesson learned hopefully. I will, on the other hand, bust into Jim Toth a little bit though. His wife went straight from the arrest to a premiere red carpet. Where was he?

Reese is professional. You have to  give her that. She fulfilled her obligation and showed up at the Mud premiere in New York although she probably just wanted to hide her head under her covers for the rest of the day. Forever and always she will be among the stars who’ve used the “Do you know who I am?” line. Shame on her. But she was a big girl. She put her big girl pants on and walked that red carpet by herself. Jim Toth was there. I saw pics of him out with her before the premiere but he left her to walk the media line by herself. At first I was annoyed because dude put her in a shitty position by driving drunk and then he left her to answer for it by promoting a movie on her own. I would have been like, “Oh no buddy, you’re walking this thing with me hand in hand!” But I don’t think they’ve ever walked a red carpet together. Reese has kept it solo ever since her divorce. This is how they roll. I’d like to assume he was close to her all night since he’s her manager as well. So maybe he’s not a crap husband. Maybe he felt like taking pics together would only enhance their jailbird story. He’s probably right. It just seemed cold. That must have been uber embarrassing and humiliating for Reese. Don’t get me wrong. It’s her fault. Still, I have to give her credit for showing. It can’t be easy going from a police station to a red carpet all in one day although I’m sure Lindsay Lohan has probably managed it.

What do you think of Jim Toth at the Reese Witherspoon Mud premiere? Should he have bitten the bullet and offered support on the red carpet or did he do the right thing by staying away?

Reese looked pretty cute at the premiere, right? Shame does her good.